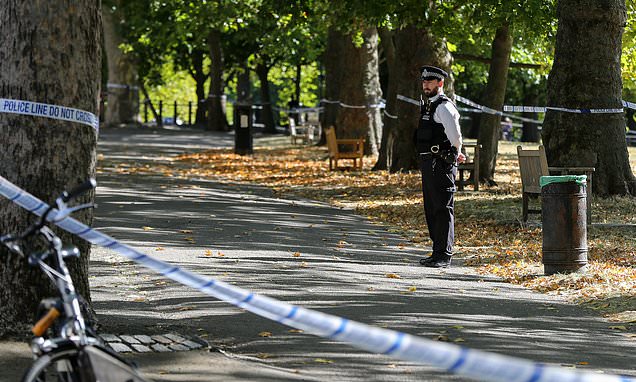 A 15-year-old boy who was stabbed death in a London park told police ‘I’m dying’ as he lay bleeding beside a playground.

An eyewitness said she saw the teen being treated and comforted by officers after the knife attack at Highbury Fields, north London, at around 9pm last night.

Heartbreakingly officers told him he was ‘going to be OK’ as they waited for an ambulance to arrive.

He was treated at the scene by paramedics and rushed to hospital, but died not long later.

The BBC said he is the youngest teenager to be stabbed to death in the capital so far this year and Scotland Yard officers have now launched a murder probe.

Witnesses reported a gang of 50 to 70 people at the scene before the attack took place.

Chloe Hadjimatheou, 47, was in the playground with her five-year-old son, she said: ‘I didn’t see the stabbing itself, I saw the young people running away and the guy on the ground. I didn’t realise what was going on I didn’t connect them at first, I thought he was drunk.

‘Within five minutes a big police van came down and then another two unmarked cars, they cordoned off the whole thing and still there was no ambulance.

‘It took a while to get there and the kid was in a lot of pain and at one point he was shouting ‘I’m dying’ and the police officer was saying ‘you are going to be OK’.

‘So I thought he would be OK. I was shocked to find out what happened this morning…

Back to Top
Close
X
Teacher, nanny docked over sexual molestation of minor…Crime ScenePM NewsBy Moronke BoboyeTwo women appeared before an Ikeja Chief Magistrate’s Court on Friday for allegedly failing to perform their duties, and causi…

X
Greenwich shooting: Man airlifted to hospital after armed police incident…Crime SceneBBCA man has been taken to hospital after being shot by police in south-east London.Firearms officers responded to multiple 999 reports of a man with …