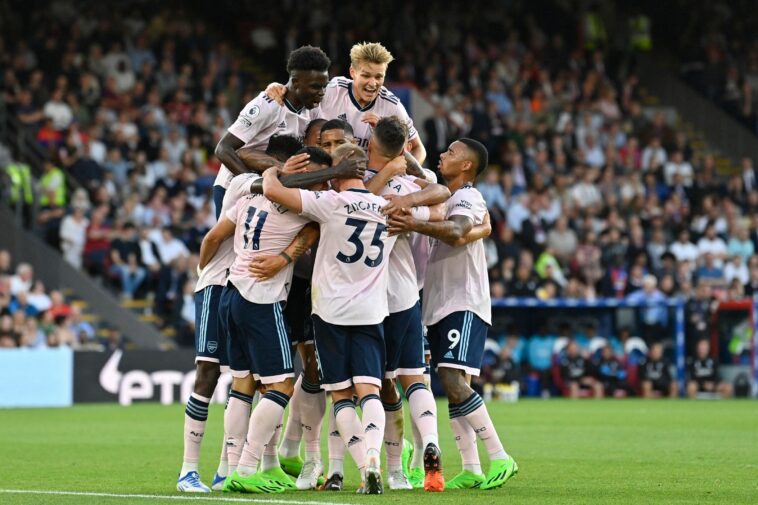 Arsenal began the 2022/23 Premier League season with a win after seeing off the challenge of Crystal Palace at Selhurst Park on Friday night.

GK: Vicente Guaita – 5/10 – Might question himself on Martinelli’s goal.

RB: Nathaniel Clyne – 6/10 – After an early chance, Martinelli wasn’t that much of a threat from open play.

CB: Joachim Andersen – 8/10 – Frustrated Arsenal from a defensive perspective and even impressed passing the ball forward.

LB: Tyrick Mitchell – 6/10 – Beaten by Saka for the second goal. Had done well against his England teammate before that.

CM: Cheick Doucoure – 7/10 – Looked keen to make his mark with a physical approach early on. Only misplaced one pass in his 75 minutes.

AM: Eberechi Eze – 7/10 – Didn’t see enough of the ball in the first half. Improved significantly in the second and should have scored.

LM: Wilfried Zaha – 7/10 – Grew into the game and started to put White under pressure in the second half.

ST: Odsonne Edouard – 6/10 – Got the nod to start but couldn’t take his golden chance when it came.

William Saliba rose to the occasion for Arsenal / Julian Finney/GettyImages

GK: Aaron Ramsdale – 6/10 – Shaky with the ball at his feet but pulled off a few important saves.

RB: Ben White – 5/10 – Not the most comfortable out of his usual position.

CB: William Saliba – 8/10 – A long overdue Premier League debut but it didn’t faze him and he did well snuffing out danger that came his way.

CB: Gabriel Magalhaes – 6/10 – Survived a penalty claim in the first half.

LB: Oleksandr Zinchenko – 7/10 – Started really well with energy up and down the left flank and claimed an assist. Faded a little.

RM: Bukayo Saka – 7/10 – Made the vital second goal that gave Arsenal their cushion.

AM: Martin Odegaard (c) – 5/10 – Bizarrely poor with the ball and good without it. Declined a glorious invitation to shoot in front of goal.

LM: Gabriel Martinelli – 6/10 – Made up for a bad early miss with the opening goal. Probably could have done more overall.

ST: Gabriel Jesus – 8/10 – The brightest spark in the Arsenal lineup and looked capable of making things happen out of nothing.