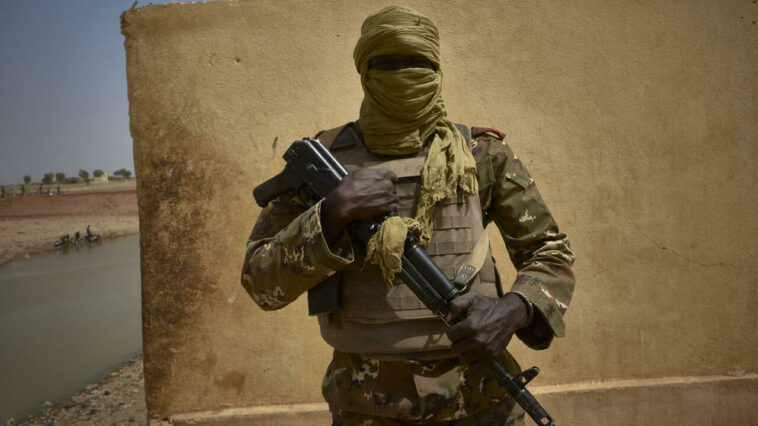 A Malian soldier stands posing by the river bank in Konna on March 20, 2021 as the Malian Prime Minister and his delegation visit the town in central Mali to attend the inauguration of the new river port, which was destroyed by bombing during the war in 2013. - Located some 50 kilometres north of Mopti, the town of Konna used to be a key area for fishing activities in central Mali. (Photo by MICHELE CATTANI / AFP)

The Malian army and “white-skinned soldiers” were involved in the deaths of 33 civilians, according to an expert report to the UN seen by AFP Friday.

The bodies of 29 Mauritanians and four Malians were found near the village of Robinet El Ataye in the Segou region, where 33 civilians had been beaten and taken away on March 5, the UN Group of Experts on Mali said in a report to the Security Council late last month.

A diplomatic source in New York told AFP that the white soldiers were paramilitaries of Russia’s Wagner group.

The civilians’ disappearance stoked friction between Mali and Mauritania at the time.

Nouakchott accused the Malian army of “recurrent criminal acts” against Mauritanian citizens in the border region. Bamako said there was no proof its army was involved.

The two countries in…