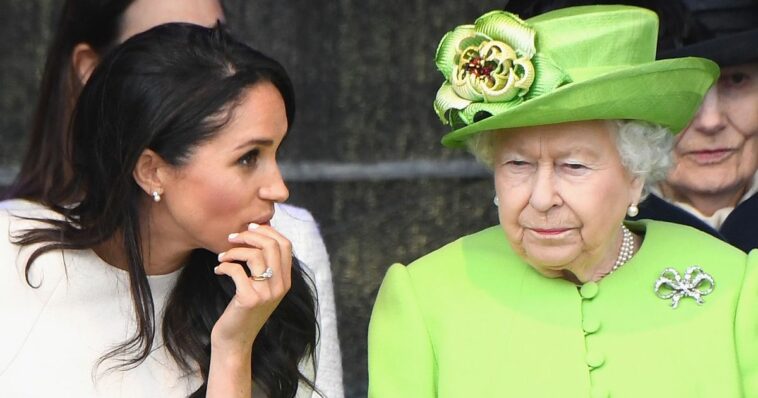 The Queen has appeared to snub Meghan Markle by staying silent and failing to send her public birthday wishes.

Meghan turned 41 yesterday and is believed to have spent the day privately at home in California with husband Prince Harry and children Archie and Lilibet.

Since she married Harry in 2018, the Royal Family Twitter account has publicly wished her a happy birthday, including last year when she reached her 40s.

However, this year, the account did not mention Meghan’s birthday at all – and the only post it made yesterday was about Princess Anne’s visit to Edinburgh.

The Daily Express’ royal correspondent Richard Palmer described the failure on the accounts to mark Meghan’s birthday as “notable” – but explained it could be down to a new convention.

Writing in the publication today, he said: “The Queen’s website neglected to mention the big day after deciding it will only mark the birthdays of non-working members of the family when they end in a zero.”

However, in contrast, the Duke and Duchess of Cambridge did send public birthday wishes to Meghan.

Prince William and Kate took to Twitter and their Instagram stories and wrote: “Wishing a happy birthday to The Duchess of Suss…

Back to Top
Close
X
Russia 'ready to discuss' prisoner swap following Brittney Griner's conviction…Live NotesMetroRussia has indicated they are ready to negotiate a prisoner swap, one day after American basketball star Brittney Griner was convicted of drug sm…

Queen's snub of Meghan Markle on her 41st birthday is 'notable', says expert