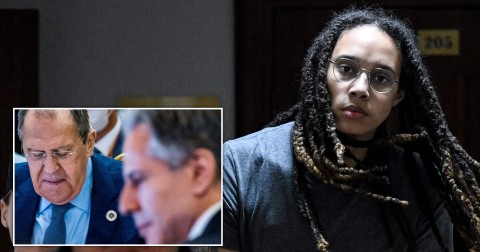 Russia has indicated they are ready to negotiate a prisoner swap, one day after American basketball star Brittney Griner was convicted of drug smuggling and sentenced to nine years in Russian prison.

Russia’s Foreign Minister Sergey Lavrov told reporters in Cambodia on Friday that the Kremlin is ‘ready to discuss this topic, but within the framework of the channel that has been agreed by the presidents,’ state news agency RIA Novosti reported.

‘There is a specified channel that has been agreed upon by (Russian President Vladimir Putin and US President Joe Biden), and no matter what anyone says publicly, this channel will remain in effect,’ Lavrov said.

His comments come a day after Griner was sentenced to nine years in Russian prison on drug smuggling charges for carrying cannabis oil into the country. She was also fined 1million rubles ($16,700).

‘It’s unacceptable, and I call on Russia to release her immediately so she can be with her wife, loved ones, friends and teammates. My administration will continue to work tirelessly and pursue every possible avenue to bring Brittney and Paul Whelan home safely as soon as possible.’

The Biden administration has reportedly offered to release a convicted Russian arms trafficker in exchange for the safe return of Griner and Whelan, another American detained in Russia.

The plan, to exchange Viktor Bout, who is serving a 25-year prison sentence in the US, for the two Americans was first reported by CNN.

‘We communicated a substantial offer that we believe could be successful based on a history of conversations with the Russians,’ a senior administration official told the news outlet.

During a press briefing Thursday, White House National Security spokesperson John Kirby said the US is pushing for Russia to accept the offer…

X
Queen's snub of Meghan Markle on her 41st birthday is 'notable', say…Live NotesMirrorThe Queen has appeared to snub Meghan Markle by staying silent and failing to send her public birthday wishes.Meghan turned 41 yesterday and is …