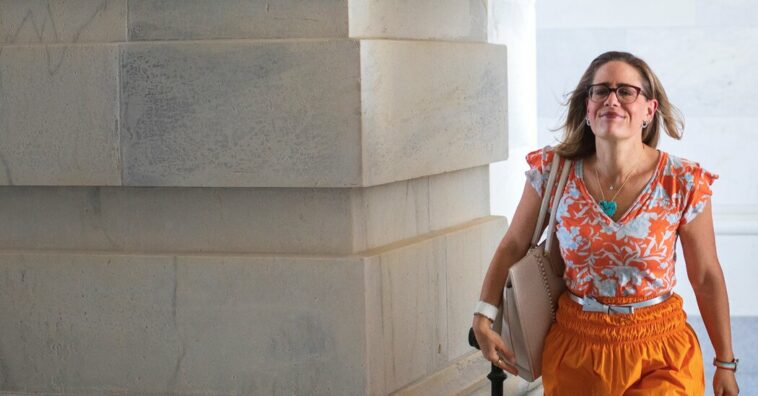 Senator Kyrsten Sinema, Democrat of Arizona, announced on Thursday evening that she would support moving forward with her party’s climate, tax and health care package, clearing the way for a major piece of President Biden’s domestic agenda to move through the Senate in the coming days.

To win Ms. Sinema’s support, Democratic leaders agreed to drop a $14 billion tax increase on some wealthy hedge fund managers and private equity executives that she had opposed, change the structure of a 15 percent minimum tax on corporations, and include drought money to benefit Arizona.

Ms. Sinema said she was ready to move forward with the package, provided that the Senate’s top rules official signed off on it…

Ms. Sinema insisted on the removal of a provision that would have limited the preferential tax treatment of income earned by some wealthy hedge fund managers and private equity executives. Democrats instead added a new 1 percent excise tax that companies would have to pay on the amount of stock that they repurchase, said one Democratic official, who disclosed details of the plan on the condition of anonymity.

Sinema agrees to Climate and tax deal, clearing the way for votes

X
Elon Musk loses $11.9bn as Tesla’s stock drops by -5.2%…More NewsRipplesThe world’s richest man, Elon Musk, has lost -4.27 percent of his wealth after the Chief Executive Officer of Tesla denied a report that he pla…