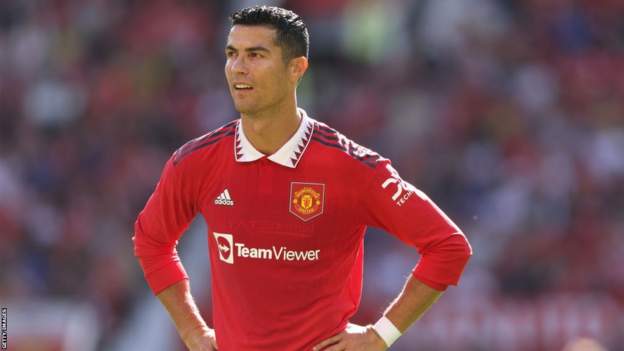 Manchester United manager Erik ten Hag says he is “really happy” to have Cristiano Ronaldo in his squad.

Ronaldo, 37, has been at the centre of speculation this summer amid a well-known desire to join a club playing in the Champions League.

With Anthony Martial ruled out of Sunday’s game against Brighton through injury, Ten Hag may need the Portugal international to lead his attack.

“I am really happy he is here,” said Ten Hag.

“We have a top striker. We stick to the plan.”

Ten Hag repeated his comments to the Dutch media this week that the players, including Ronaldo – who left last Sunday’s friendly with Rayo Vallecano at Old Trafford before the final whistle – were wrong.

Back to Top
Close
X
Seven new rules for 2022/23 Premier League season all fans should be aware of…English FootballThe Premier League is set to return this weekend for another season full of shocks and surprises.Manchester City will defend their league title and bi…

Ten Hag 'really happy' to have Ronaldo in squad