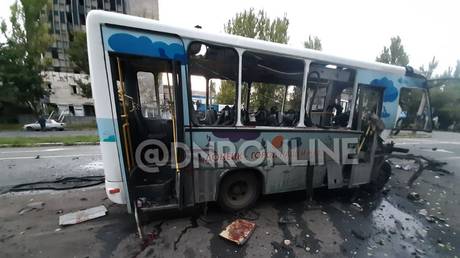 At least three civilians were killed in the Ukrainian shelling of northwestern Donetsk, the local territorial defense force said on Friday. One of the Ukrainian projectiles hit a regular bus carrying people home from work, authorities said, adding that the bus was “destroyed.”

Photos and videos that surfaced on social media showed the charred wreckage of the bus that was apparently moving along a street in Donetsk when it was hit by a Ukrainian projectile fired by a ‘Grad’ multiple rocket launcher.

Earlier on Friday, Donetsk authorities claimed that Ukrainian forces had shelled several areas in the city, including a hospital. At least one rocket made a direct hit through the roof, images from the scene suggest. The attacks left at…

Back to Top
Close
X
ASUU not the only one in Nigeria, FG can't borrow to pay them – Festus Keyamo…More RifsThe Minister of State for Labour and Employment, Festus Keyamo, has declared that the President Muhammadu Buhari-led government cannot borrow to settl…