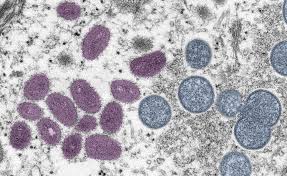 AN urgent monkeypox warning has been issued amid fears the virus could become endemic in the UK.

Around 2,468 infections have been confirmed across the country – with at least 77 ‘highly probable’ cases.

While medics at the UK Health Security have urged Brits to stay calm, the US this week declared a public health emergency over the virus.

The declaration came after the World Health Organization (WHO) also called the outbreak a global emergency.

Now, both politicians and LGBT+ groups have demanded the government increase its efforts to help curb the spread.

Vaccines have already been rolled out in some parts, but the group has said this now must become a priority.

In a letter penned to health secretary Steve Barclay, the group said: “We cannot afford to allow monkeypox to become endemic in the UK.

“Luckily, we have the tools required to stop this outbreak and prevent further risk to health now. We ask that you do so urgently.”

Signed by the LGBT+ groups for Conservatives, Labour, Liberal Democrats, Greens and Scottish National Party, along with sexual health charities including the Terrence Higgins Trust, the group said communication on the outbreak is key.

“We need clear, non-stigmatising messaging, delivered direct to GBMSM about the symptoms of monkeypox and what to do if you suspect you have the virus to inform and reassure people (rather than the current broadcast-to-all approach that constantly mentions GBMSM.

“Messaging must reach communities at high risk of acquiring monkeypox, through targeted messaging on apps, online and in the queer media.

“Vaccinating those most at risk of monkeypox must be a priority if we are to stand a chance of preventing the virus from becoming endemic in the UK.”

Back to Top
Close
X
What should worry most Americans about our Monkeypox response…HealthThe AtlanticWu: And that’s been clear for some time now—that the outbreak has been ballooning, and that resources are scarce. Should we have declared …