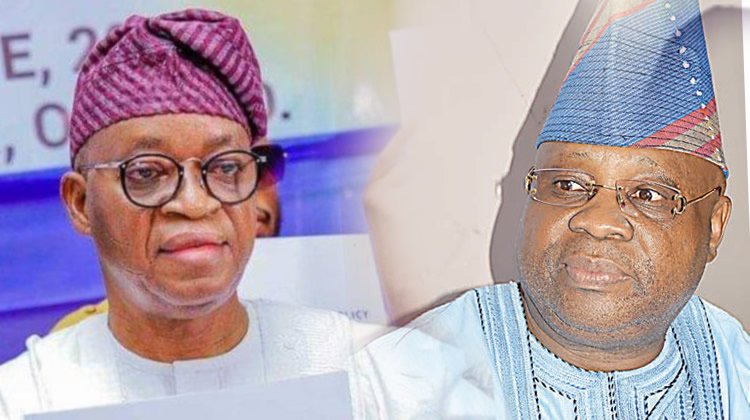 Governor Adegboyega Oyetola of Osun State on Friday asked the Election Petition Tribunal in Osogbo to nullify the election of the governorship candidate of the Peoples Democratic Party, Ademola Adeleke.

According to the governor, the election was fraught with certain irregularities.

He also said that Adeleke ought not to have been declared winner as he was not qualified to have contested the election in the first place, having submitted a forged certificate to the Independent National Electoral Commission.

Saturday PUNCH reported that Adeleke was returned elected by the INEC, after defeating his closest challenger, Oyetola, and 13 other candidates, scoring a total of 403, 371.

Oyetola got 375, 027 votes and won in 13 Local Government Areas of the state to come second in the election.

A member of Oyetola’s legal team, Kunle Adegoke (SAN), in an interview with Saturday PUNCH immediately after filing the petition in Osogbo said the governor has assembled 50 lawyers including 10 Senior Advocates of Nigeria, listing 13 grounds on which premises Adeleke should be disqualified.

Adegoke said the election in many 749 polling units was fraught with irregularities.

The legal team, he said, has established by the petition that the election in those 749 polling units across 10 Local Governments in Osun State was characterized by irregularities pertaining to overvoting.

Asked when the trobinal would commence sitting, Adegoke said he does not know.

“We don’t know yet but now that we have filed, it is expected that once the PDP is served, their lawyers will file their own defence then we will file a reply to their defence. That is when the tribunal will be able to give a date.

“Except if either of the two parties have an application that requires urgency, only then can the Tribunal have an emergency sitting but as of now nobody knows the date”, he said.

Back to Top
Close
X
Inflation: Nigeria doing better than USA, Canada, Russia, Spain – Keyamo…FeaturedThe Minister of States for Labour and Employment, Festus Keyamo, has said Nigeria is doing better than major countries in the word in terms of the per…

X
Govs to Buhari: Sack workers aged 50yrs, levy anyone earning over N30,000…FeaturedIn a bid to prevent the nation from imminent economic collapse, the Nigerian governors have advised the federal government to retire all federal civil…