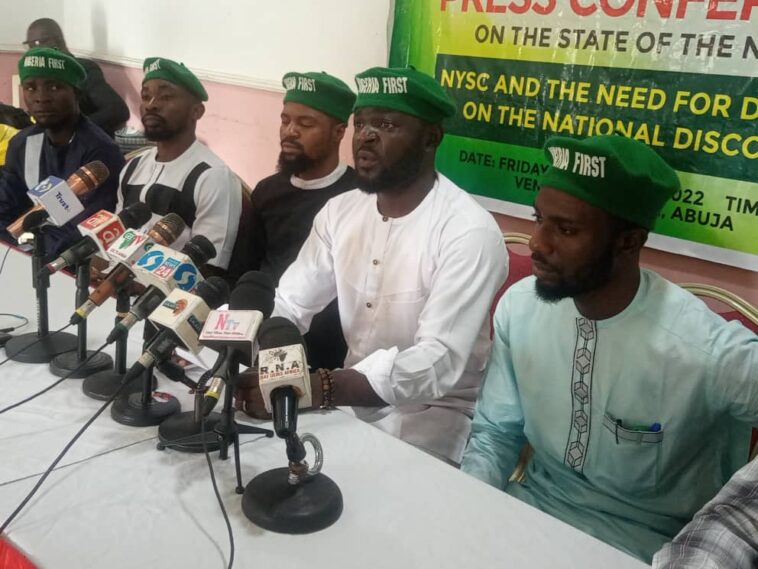 The Federal Government has been urged to ignore the calls to scrap the National Youth Service Corps (NYSC).

The Convener, Nigeria First, Comrade Richard Augustine, made the call during a news conference at the end of a meeting of the organisation in Abuja, on Friday.

According to him, it is disheartening that some were calling for the scrapping of the NYSC, insinuating it has outlived its usefulness of national integration and unity.

“Sadly, those against the existence of the NYSC have elected to turn the truth on its head for inexplicable reasons and link the continued existence of the scheme as responsible for the death of corps members and other issues occasioned by the spate of insecurity in the country.

“It is on record that the operations of the NYSC have evolved over the years in conformity with the global trend from a scheme devoted to national integration to a skill and entrepreneurship hub for the teeming youthful population of the country,” Augustine said.

He said that those calling for the scrap of NYSC are not in tune with the reality on the ground in the country and that they may be ignorant or mischievous, given that the operations of the NYSC in Nigeria have been noteworthy and instrumental in implementing policies and programmes that place the youths on the pedestal to achieving greatness.

“A good example was the strike action by resident doctors in the country that left patients in public hospitals across the country stranded. However, the intervention of NYSC doctors and nurses saved the situation in what could have been a national health crisis…

Insecurity: FG urged to ignore calls for scrapping of NYSC