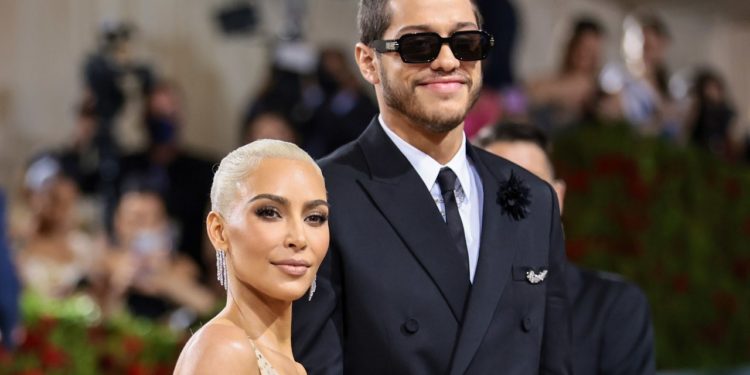 After nine months of dating, Kim Kardashian and Pete Davidson are calling it quits. The pair decided to break up sometime this week, but plan to remain friends, according to E! News. A source close to the couple added that while Kardashian and Davidson have “a lot of love and respect” for one another, their long distance relationship became “really difficult to maintain” amid demanding schedules.

This summer, Davidson has been in Australia shooting A24’s forthcoming stoner movie Wizards! Kardashian, meanwhile, is a mother of four whose highly publicized divorce from Kanye West is ongoing. The two met after Kardashian hosted Saturday Night Live in October of last year. They shared their first kiss on camera for a sketch in which they played Princess Jasmine and Aladdin.

“When we kissed in a scene, it was just a vibe,” Kardashian later said of the moment during an episode of The Kardashians. “And I was like, ‘Oh, shit. Maybe I just need to try something different!’

Surprised by the small but telling “zing” she felt during the scripted kiss, Kardashian resolved to make the first move at her SNL afterparty. When Davidson didn’t show up, she decided to try a different strategy: calling a producer at SNL a few days later and asking for Davidson’s number directly.

“I was just thinking, ‘Heard about this BDE, need to get out there,’” she joked.

This content can also be viewed on the site it originates from.

Kardashian’s friends and family were initially skeptical of the relationship. She admitted during the episode that she wasn’t planning to date Davidson seriously—she was “basically DTF.” But Davidson soon won her over with his sense of humor. Even Kardashian’s sisters, Kourtney and Khloé Kardashian, noticed a change in her mood.

“I definitely notice that Kim is happier,” Kourtney said. “I think that she’s so much nicer now, so thank you, Pete! I’m so into this new Kim.”

During their PDA-packed fling, Kardashian and Davidson went on multiple vacations and attended the Met Gala together. Davidson also got several tattoos in Kardashian’s honor. In fact, at the seven-month mark, they were reportedly considering moving in together.

“Their relationship continues to grow,” a source told Us Weekly in June. “They’re very secure with their relationship and talk future plans and moving in together. They’re looking forward to vacationing together this summer and having romantic alone time. He just wants to make her happy and is making up for not being able to go with her to Kourtney’s wedding.”

And only last month, Davidson spoke movingly of his desire to become a father.

“That’s kind of what I’m just preparing for now, is trying to be as good as a dude and develop and get better, so when that happens, it’s just easier,” he said in promotional footage for Hart to Heart, a Peacock series hosted by comedian Kevin Hart.

Ultimately, it seems Kete couldn’t go the distance. It’s the end of an era, but they had a great run.

The post Kim Kardashian and Pete Davidson Have Reportedly Broken Up appeared first on Glamour.

Kim Kardashian and Pete Davidson have reportedly broken up