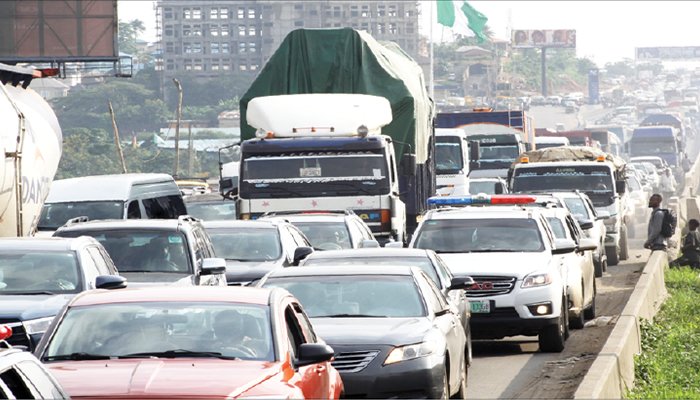 Suspected hoodlums, on Tuesday, reportedly attacked some motorists at the Londbridge and Kara ends of the Lagos-Ibadan Expressway, Ogun State.

Eyewitnesses claimed that the miscreants, who struck around 6am, robbed people going to work, as the police described reports of abduction on the road as fake news.

PUNCH Metro gathered that the gang exploited the gridlock caused by the ongoing reconstruction of the expressway.

A banker, Ibrahim Odebunmi, said he had to abandon his car to join others fleeing the scene.

He said, “I can’t really say the exact time, but I know it was after 6am. We were in the traffic around the Mikano company area and vehicles were moving slowly. We just saw people running backward and shouting ‘run’. So, I put off my car, picked the keys and phones and started running. Even the passengers in my car also joined me in running.”

He said motorists stopped running when a man urged them to face the gang.

“So, we stopped running and started moving inward Lagos. What we heard was that they (bandits) jumped over the bridge. I heard someone saying he saw one of them with a laptop,” he added.

A cleric, Gbenga Obaleye, who shared his experience on Facebook, stated that he witnessed the attack around the Kara Cattle Market.

He said when those that scampered to safety returned, they discovered that their money, ATM cards, phones and other valuable items had gone missing.

“This is not to spoil any tribe. Members in my church were coming from camp this morning at 5.30am. The Fulani came out from Kara where they used to sell cows. 20 people have been taken into the bush, that little bush,” he stated.

In another post, he said, “Please, be careful at Kara. Fulani have been kidnapping people. God just saved a family in our church now. Please, don’t start rushing home from camp. Let it be like 7.30am.”

A cleric, who identified himself only as Pastor Adebayo in a voice note that went viral on Tuesday, said the incident happened around 6.20am.

“Right in front, they were taking people away. I had to escort my wife away from the incident which I did by behaving as if I was a bandit abducting someone and leading the person into the bush. That was how we were able to escape.

“By the time we came back to pick up our car, they had ransacked it and carted away our bags, laptop, phone and others.”

“They masked up and were with guns and machetes.”

Adebayo claimed that he reported the matter at the Ogba Police Station in Lagos.

However, another eyewitness, Pastor Wilson Simire, who also abandoned his vehicle on the road, told PUNCH Metro that nobody was kidnapped.

He said, “One guy said he lost his laptop. The slippers I was putting on, I had to abandon them, and I don’t know where they are right now.

“I cannot identify them (attackers) but they were young men. They just came and started hitting glasses with cutlasses and shouting. People began to panic and ran out of their vehicles.”

He said he had no reason to report to the police because “nothing was stolen from me.”

The Warewa Divisional Police Officer, Abdulfathi Ogunsanya, said he was not aware of any abduction.

The DPO, however, said one person lodged a complaint about his missing phone and other valuables.

Oyeyemi, a Superintendent of Police, in a statement, described the report of the abduction of 20 people as fake news.

He said, “In order to dispel the wicked rumour which is capable of causing panic in the mind of the public…

Back to Top
Close
X
Niger records 175 rape cases in 19 monthsLatest NewsA total of 175 rape cases have been recorded in Niger State between January 2021 and July this year.The Permanent Secretary in the Ministry of Women A…

X
Diesel hike: NRC reduces Lagos-Ibadan trips by 67%…Latest NewsPunchThe hike in diesel price has forced the Nigeria Railway Corporation to reduce the number of trips on the Lagos-Ibadan Train Service by about 66.6…