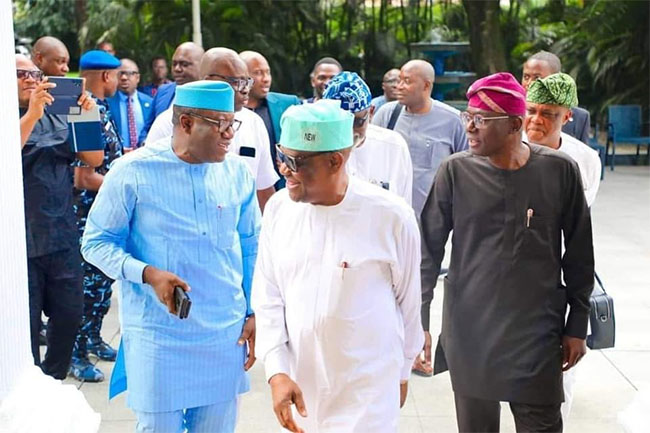 There are strong indications that the Rivers State All Progressives Congress led by immediate past Minister of Transportation, Rotimi Amaechi, is angry about the romance between the APC presidential candidate, Bola Tinubu’s men; and the Rivers State Governor, Nyesom Wike.

Wike has in recent times been meeting with some APC chieftains, including Tinubu’s allies. On Monday, the Lagos State Governor, Babajide Sanwo-Olu, was invited by Wike to inaugurate a road project.

The Rivers governor also invited former Governor Aliyu Wamakko of Sokoto State and the Speaker of the House of Representatives, Femi Gbajabiamila to inaugurate some projects in his state.

Earlier, some APC governors led by the Chairman of the Nigerian Governors Forum, Kayode Fayemi, had also met Wike in his state amid his feud with the presidential candidate of the Peoples Democratic Party, Atiku Abubakar.

However, sources close to Amaechi, told The PUNCH that the romance between Wike and Tinubu was disrespectful especially since it was public knowledge that Wike and Amaechi were political foes.

They also accused Tinubu of supporting Senator Magnus Abe who recently dumped the APC to run for governor on the platform of the Social Democratic Party.

An associate of Amaechi who wished to remain anonymous because he was not authorised to speak on the matter, said, “The APC leaders have been coming to Rivers State to lobby Wike and make all manner of promises to him. These people never came to Rivers even when the party was having a crisis.

“They should not forget that Amaechi came second in that presidential primary and is still the leader of the APC in Rivers State. Rather than rally around him, they have been romancing Wike. Tinubu is among the sponsors of Magnus Abe who has defected to the SDP.

“Magnus Abe is Tinubu’s boy. He is always with Tinubu. Even after joining the SDP, he is still with Tinubu and has promised to work for Tinubu’s campaign. Yet they cannot caution him.”

The source stated that Atiku might begin to woo Amaechi soon if quick action was not taken.

Speaking with The PUNCH,  an APC chieftain, Chukwuemeka Eze, said he was not aware if Atiku had begun reaching out to Amaechi.

Eze, however, said if Amaechi decides to join the PDP, then Tinubu should be blamed.

He added, “If Amaechi decides to rejoin PDP, it may not be of his own making but due to the acts and attitude of Senator Bola Ahmed Tinubu and managers of his campaign team coupled with the new style of leadership of those currently running APC.

“Let me state unequivocally that the manner and ways Amaechi and his political Team are being neglected both in the formation of the APC Presidential Campaign Council and most of the activities of the party since after the APC Presidential Convention is not the best way to treat a leader with the stature or status of Amaechi. You don’t do that.

“To worsen the situation, the manner in which Tinubu and his associates continued to associate with Governor Nyesom Wike of Rivers State without any consultation with Amaechi or any member of his political family is not only sad but very unfortunate.”

Eze said Amaechi remained an institution in Rivers State politics and that anybody or political leader who feels he can undermine him is doing that at his or her own peril.

“Based on his rating, I will not be shocked if Atiku Abubakar is wooing him based on the fact that the two leaders are not only very close associates politically and but have remain great partners in the progress of this country so I have nothing against such a union,” he said.

When contacted, the Rivers State APC Publicity Secretary, Chris Finebone, told The PUNCH that Wike was desperate for an alliance with Tinubu and the APC to remain relevant after 2023.

Commenting on the romance between Tinubu’s men and Wike, he stated, “In politics, the concentric circles of conspiracy are numerous. Sometimes they overlap and other times they are incongruent. But very often, the end result is one – how to appropriate political power at the expense of others or competitors. Therefore, in the instant case, whether it is Asuwaju that is going after Governor Wike or the latter that is courting Asuwaju, the end result is how to survive 2023 general elections and remain politically relevant thereafter.

We know that the desperate party or side in the entire calculation is Wike. Reason is that head or tail with Atiku, he’ll lose. Assuming without conceding that Atiku wins, he’ll surely put away Wike in a cold manner. Wike understands this. In a scenario where Asuwaju/APC wins, Wike deserves the grace of God to walk free. He needs the protection post 2023 so badly. Therefore, it is clear that Wike is the one chasing after Asiwaju/APC and not the opposite.

Whether asked if the romance was a slap on Amaechi, he stated,  “I have a biblical verse as an answer. ‘Thou sayest!’

Also in a chat with The PUNCH, the Deputy spokesman of the APC in the Rivers State, Darlington Uwauju, said Amaechi was one of the few political leaders that could be trusted and that he would not leave the APC for the PDP.

The Chairman of the Lagos State chapter of the APC, Cornelius Ojelabi, said anyone was free to visit Wike as he was not Tinubu’s enemy.

On Tinubu’s alleged link to Magnus Abe’s defection, he said,  “I don’t know anything about that. All I know is that politics is a game of numbers. When you are in a contest, you just have to approach all that is approachable and solicit support.”

On whether he sees the possibility of Wike forming an alliance or crossing over to the APC, Ojelabi responded, “It is all about passion and you know Wike has a passion for politics. Wike was part of the southern governors who came to Lagos State before now and said that the Southern governors won’t support any presidential candidate from the North.”

Also speaking with The PUNCH, a former Minister of Communications, Adebayo Shittu, who is also a Tinubu campaigner, said there was nothing wrong with the new romance with Wike.

Shittu said Amaechi should be happy that someone like Wike was being linked to the APC.

“Nobody will stop Wike if he wants to come to APC. Again, you know Wike is a tactician. If I were in Amaechi’s shoes, I would see Wike’s coming as an opportunity to settle reconcile with him. What he should be thinking of at that point is that with Wike coming into the party, will there be an in-fighting anymore?,” he asked.

Shittu also rubbished reports that Tinubu had a hand in Abe’s defection, adding that Tinubu could not be blamed for longstanding crisis in the party in Rivers State.

“Is it not a stupid idea for anybody to suggest that Abe is not intelligent enough to take a decision on his own? There are certain things that sound silly to one’s hearing, except that it is always news to the media.

“Abe has been running a battle politically with Amaechi. Even at the last governorship primary, he didn’t win the ticket to fulfil his ambition. Tell me, does he need anybody to tell him the next step to take if he fails to clinch the APC ticket,” he asked.

Shittu added that Tinubu was not fighting with Amaechi whom he described as a brother and friend. He noted that when Amaechi accused APC delegates of selling their votes, Tinubu refused to respond.

“Is he fighting Amaechi? Even when he alleged that some delegates were given bribes for vote-buying, did Tinubu say anything? That’s because he doesn’t want to join the fray. If you study Tinubu well enough, you will know that he doesn’t take issue with people. That’s why you see people who fight him coming back to him at the end of the day,” he said

An analyst, Sunny Anyanwu, argued that it was almost impossible for Wike to defect to the APC, adding that he may have been hurt, but he would not dump the PDP.

‘’It will amount to a dog eating its vomit if Wike defects to APC. Yes I agree Wike has been hurt.