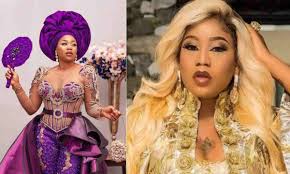 Serial entrepreneur, entertainment celebrity and screen goddess, Toyin Lawani of the famed Tiannah Empire has revealed some shocking details about her life.

In an interview with Chude Jideonwo, the Real Housewives of Lagos star said she left home at a young age as a result of an unsavoury experience.

“When I was 15, I got raped by one of my uncles. It was so bad for me. I couldn’t tell my mum. Do you know when someone bullies you to the extent that you can’t talk?

I opened up to one of my aunties, and she took me to Ibadan where they tried to get rid of the pregnancy. The pregnancy was about five months already because I didn’t tell anyone.

It was around that time that I was to get admission to UNILAG. My mum was on the phone asking me why I wasn’t back from the holiday at my grandma’s place, I didn’t know what to tell her so I fainted.

When she came back, because she was in Hong Kong at that time, the doctor told her. She couldn’t take it, because I was so young and because the person was so close to the family. Who I was, and where I have been, has shaped me into who I am today. I can take a loss, and stand up straight in front of you and I won’t show you weakness,” she narrated…

Back to Top
Close
X
Madonna says her 16-year-old son wears her clothes better than she does…EntertainmentPage Six There’s more than one fashion plate in this famous family.While appearing on “The Tonight Show Starring Jimmy Fallon,” music and style i…

I was raped by my uncle at 15 — Toyin Lawani