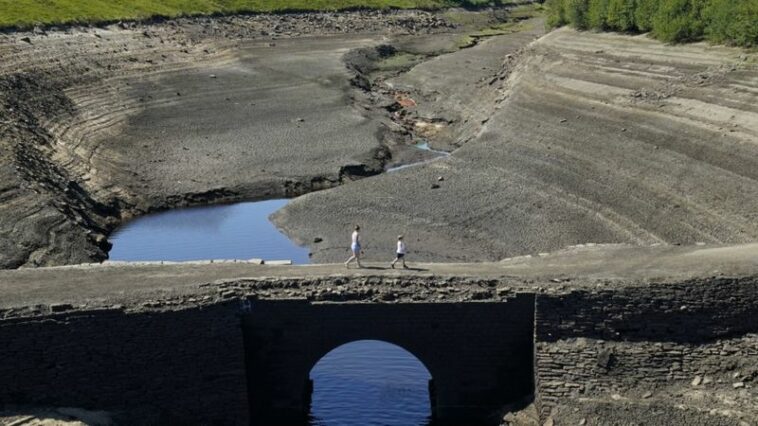 Everyone who uses water must rethink and make sure they use it wisely, the chairman of the body that has declared droughts around England says.

“We have got to rethink… and that means everyone, not just regulators and government,” said Harvey Bradshaw, chair of the National Drought Group.

He is also executive director of the Environment Agency, which has warned the drought could last into next year.

A Met Office warning of extreme heat is continuing into Sunday.

The amber alert covers southern and central England and parts of Wales.

Rain is forecast for Monday but the agency says weeks of showers are needed to replenish water sources.

An official drought was declared in eight areas of England on Friday by the National Drought Group, which comprises representatives from the government, water companies, the Environment Agency and others.

John Curtin, executive director of local operations for the Environment Agency, told the BBC “this is not a normal summer” and warned lack of water would be an issue for several months.

“We’ll need probably average or slightly above average rainfall this autumn into this winter for us to not be in a drought next year,” he said…

Back to Top
Close
X
Witch doctors 'kill 100 vultures with poisoned buffalo to use in potions'…EnvironmentDaily StarThe bizarre deaths of 100 vultures found dumped in a safari park are being blamed on local witch doctors.The grisly scene was discovered aft…

England drought: Everyone must rethink their water use, experts say

X
UK heatwave: Final day of 'extreme' heat with thunder on way…EnvironmentBBCMuch of the UK has been experiencing another day of high temperatures - but the spell of extreme hot weather is due to come to an end with thunders…