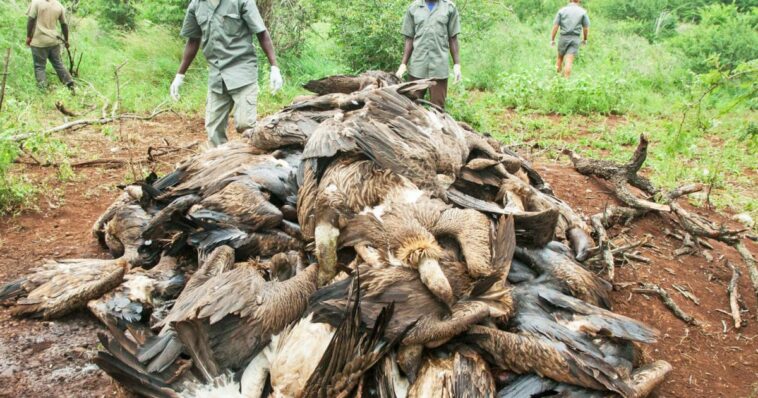 The bizarre deaths of 100 vultures found dumped in a safari park are being blamed on local witch doctors.

The grisly scene was discovered after a buffalo was poisoned and eaten by the flock of predators.

It happened at the iconic Kruger National Park in South Africa, and saw the powerful poison kill the birds almost instantly.

A hyena was also killed after it tried to eat the remains of the buffalo.

Local news reports state that the actual targets of the poisonings were the vultures, as witch doctors use the body parts in potions.

Acting Chief Inspector of SANParks – which runs the world famous park – Hapiloe Sello said: “This reprehensible act once again highlights the ever-present danger of poisoning of wildlife by unscrupulous people.

“The scene has been cordoned off for further investigation and the carcasses have been burned to ensure that there are no further poisonings and we have 20 birds still alive.

“Initial indications are that the carcasses were being harvested for their body parts and SANParks can confirm that we have referred this matter to police for full investigation.

“Rangers on patrol discovered the carcass of a buffalo which appears to have been laced with poison and they found over 100 dead vultures and a hyena that fed off the carcass.

“Poisonings on this scale given the critical nature of vultures globally place this critically endangered species at increasing risk of extinction so we have to end it now.”

The exact poison used by the alleged witch doctors was not declared by local police officials, but it is thought that it would have killed humans who came into contact with it given how it managed to put away a huge beast such as a buffalo.

Back to Top
Close
X
Woman went into hospital for routine operation but lost 'half her bum cheek'…Last PostDaily StarA woman said she lost half of her left bum cheek thanks to a “flesh-eating” infection she caught while on hospital.Lesley Mangnall, 45, went…

X
England drought: Everyone must rethink their water use, experts say…EnvironmentBBCEveryone who uses water must rethink and make sure they use it wisely, the chairman of the body that has declared droughts around England says."We …