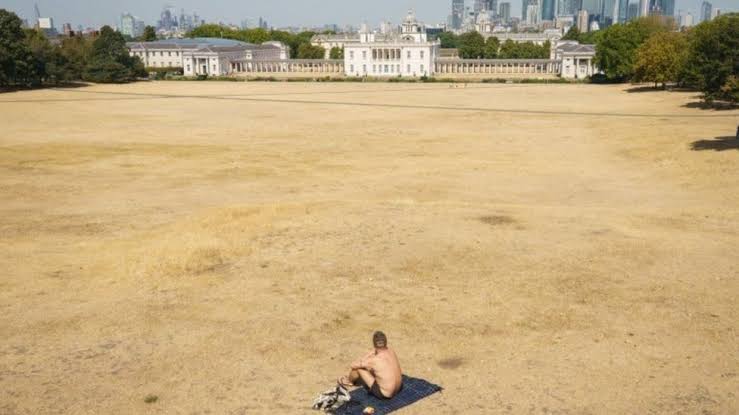 Much of the UK has been experiencing another day of high temperatures – but the spell of extreme hot weather is due to come to an end with thunderstorms.

Parts of Scotland and Northern Ireland had rain and lower temperatures on Sunday, spreading into parts of England and Wales on Monday.

A Met Office amber warning for extreme heat remains in place until midnight.

Experts have warned a lengthy period of rain would be needed to end the drought declared in parts of England on Friday.

A lot of land has been left parched and hard by the heat, so rain is likely to hit the ground and run off – as it would on concrete – which could lead to flash flooding.

The extreme heat warning has been in place for a large part of England and Wales for four days – making it the lengthiest alert since the system was introduced last year.

It has not been as high as July’s heatwave – when recorded temperatures in the UK topped 40C for the first time – but the extreme heat has lasted longer.

Temperatures were forecast to reach 33C in southern and central England on Sunday.

“As we’ve had some very high ground temperatures, it doesn’t actually take too much for the air to become even more unstable and for thundery showers to develop quickly.”

Lincolnshire Police confirmed a teenage boy died on Saturday after getting into the sea at Skegness as temperatures prompted many people to flock to the beaches.

The hot weather has also led to wildfires around England, from the North York Moors National Park to Dorset on the south coast…

Back to Top
Close
X
England drought: Everyone must rethink their water use, experts say…EnvironmentBBCEveryone who uses water must rethink and make sure they use it wisely, the chairman of the body that has declared droughts around England says."We …

X
African digital innovators are turning plastic waste into value – but there are …EnvironmentSeun Kolade, De Montfort University and Muyiwa Oyinlola Plastic pollution is a growing global menace. Between 2010 and 2020, the global production of …