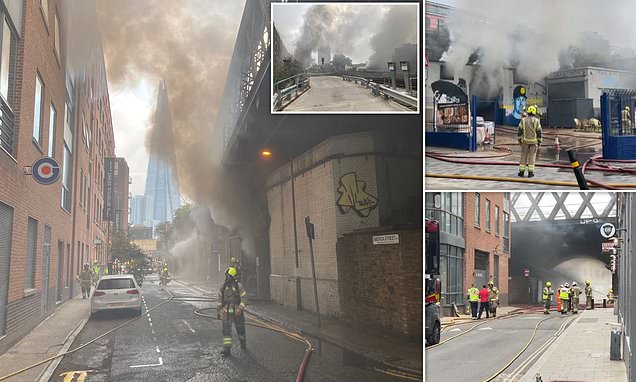 A large fire has broken out next to London Bridge station forcing it to close as 70 firefighters tackled the massive blaze.

The station is closed and will remain so until further notice, with severe disruption to all journeys.

The London Fire Brigade received its first call to the incident at 9.29am this morning.

It sent around 40 firefighters, but  10 engines and an extra 30 personnel were later also called to the scene. Fire crews from Dowgate, Whitechapel, Shoreditch, Shadwell and surrounding fire stations are in attendance.

Local residents are being advised to keep their windows and doors closed to protect against the smoke, which has also spread into railway tunnels close to London Bridge station.

Several buildings in the vicinity of the fire have also been evacuated after it emerged a railway arch was completely alight.

London Fire Brigade reported that the fire was brought under control at 11.20am, but Southwark Street is closed between Southwark Bridge Road and Lavington Street whilst crews continue to work to make the scene safe.

The station has completely closed while the Jubilee line has been part suspended between Wembley Park and Stanmore, with severe delays on the rest of the line.

Both London Bridge station and Southwark Underground station remain closed, and no injuries have been reported.

Major disruption between London Bridge and Waterloo East is expected until at least 3pm this afternoon.

Southwark station Commander Wayne Johnson, who was at the scene, said: ‘The blaze is producing heavy smoke and those living or working in the local area are advised to keep their windows and doors closed.

‘Trains to and from London Bridge are affected and several buildings have been evacuated.’

The Brigade’s 999 operators took 35 calls to the blaze and managed to gain footage of the fire by asking callers to live stream using their mobiles.

London Fire Brigade said: ‘When a 999 call is received by the Brigade, the caller may be asked if they would like to provide a live video stream of the scene using their smartphone.

‘The Control Officer will send a text message with a secure, one-time-use link that opens a live stream direct from the phone to the Control Room. 999Eye provides better situational awareness and allows us to offer the best advice based on live footage.’

British Transport Police are assisting the London Fire Brigade as they respond to the incident, as are Metropolitan Police officers from Southwark.

‘Please avoid the area and allow the London Fire Brigade to do their job. London Bridge and Southwark Stations are closed. There are also delays on the Jubilee line.

Train operator Southeastern said the fire, which is on Union Street in Southwark, has ‘severely disrupted’ all routes through London Bridge.

It wrote on Twitter: ‘Due to a fire next to the track between Waterloo East and London Bridge, services across all routes through London Bridge are severely disrupted.

‘Trains are being diverted to other London terminals or terminated at alternative locations.’