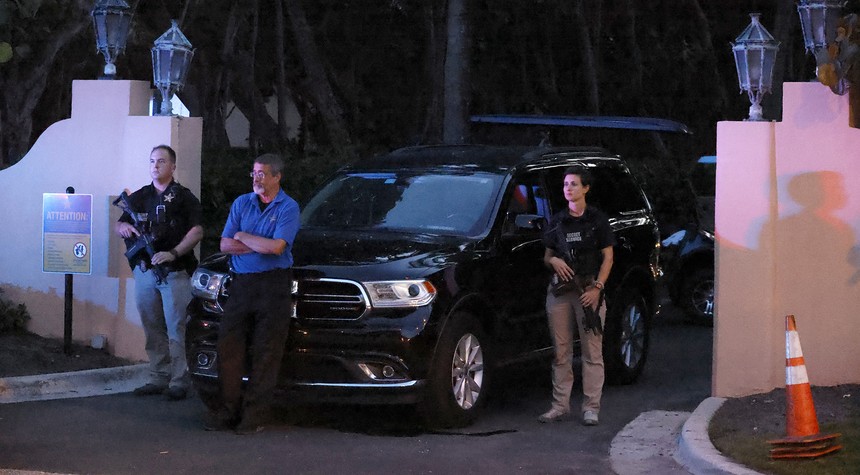 The same Florida magistrate who approved the raid on former President Donald Trump’s Mar-a-Lago home will decide on Thursday if we can see why he approved it. We’d like to check his work, you understand. Because it looks like the FBI is up to its old tricks again. Indeed, the FBI’s supposed “leaker” who complained about Trump’s document cache seems to have obliterated the excuses we’ve heard for the raid and laid bare the sole reason behind it: get Trump.

News organizations and Judicial Watch want to see the affidavit which supports the raid — the raid that was so, so emergent that the DOJ waited weeks to ask for the search warrant, and then days to execute.

Judicial Watch ⚖️ on Twitter: “BREAKING: A hearing is ordered on 8/18/2022, at 1 p.m. ET in the West Palm Beach Division regarding Judicial Watch & media requests for the underlying affidavit/other warrant materials tied to the unprecedented raid on the home of Trump (1/3). https://t.co/gIKAVpz0co / Twitter”

BREAKING: A hearing is ordered on 8/18/2022, at 1 p.m. ET in the West Palm Beach Division regarding Judicial Watch & media requests for the underlying affidavit/other warrant materials tied to the unprecedented raid on the home of Trump (1/3). https://t.co/gIKAVpz0co

The FBI and DOJ, of course, don’t want us to see the evidence that allegedly supports the propriety of the Mar-a-Lago smash and grab. They must have had an overweening need to get those nuclear secret documents that the Feds told the media Trump had.

Thing is, we don’t need to read the docs; we’d just like to know that there’s more support for the report than the leak to The Washington Post that Trump had “classified documents relating to nuclear weapons.” Or more than the speculative rantings of Maggie Haberman on Twitter. Or more than the Wall Street Journal story leaked by the Feds in their tried-and-true continuous feedback loop. This loop starts with leaks to the media, the media dutifully report them, and the FBI uses the stories as “evidence” in their warrant applications. See how that works? They pulled this trick in the Alfa-Bank, Steele Dossier, Gretchen Whitmer, and Russian Collusion cases. So we hope you understand the skepticism.

Indeed, as I wrote those words above, news came from Professor Margot Cleveland, who writes for The Federalist, that that’s exactly what they did.

Prosecutors will argue Thursday that one of the reasons for keeping a lock on the documents is that they reveal sources, such as their media transcribers — in this case, The Wall Street Journal, which “set the narrative” for the raid.

I was just looking at this letter to the then-head of NARA from the Barack Obama Foundation earlier today because I was working on another angle to this story. It’s a story about who can decide which documents can be classified and that the president has all authority to do it. Trump did this in public and reportedly in private, in October of 2020 and before he left the White House. He had sole rights to do it.

The raid of a president over documents is anomalous, to say the least.

To put it in context, the Clintons stole nearly $200,000 worth of furniture, part of which they were told to pay back. There was no FBI raid. Later, Hillary’s server was chock-full of classified information that was easily hackable by spy agencies. No raid. Then there were President Obama’s 30 million pages of “unclassified documents” that he failed to return to the National Archives (NARA), also with no FBI raid. NARA and Obama’s foundation agreed to a Memo of Understanding (MOU) promise in 2018 that the documents would be digitized and in exchange, Obama’s foundation had to pay $3.3 million to NARA to be allowed to keep the records “on loan.”

David Ferreira signed that Memo of Understanding with the Obama people. Understand, Obama got to keep access to the documents because his foundation paid NARA to keep them “on loan.” No one gave Obama the side-eye, much less brought a battering ram to his Chicago manse.

So what the DOJ wants to keep secret are the documents behind the search warrant. While it’s normal to keep these things under wraps until there’s an indictment — and there will be an indictment of Trump — these are not normal times.

But now Cleveland’s story bares the lie. It ain’t about the paperwork. It’s not about the espionage act. We already knew this on some level, but this latest story removes two objections prosecutors can use to keep the affidavit sealed in the hearing Thursday.

Worse, it shows in shining glory — again — that this raid was pretextual, that it was an overly broad search warrant that gave FBI agents carte blanche to take every document, passport, and piece of Melania’s underwear they wanted. SO THEY COULD FIND A CRIME.

Here’s how Cleveland put it.

Given these problems with the underlying legal theories, targeting a political enemy and former president of the United States with a search warrant represents an unforgivable lapse in judgment. And as for the claim that the DOJ needed to recover these vital national security documents, the shifting stories spread by leakers suggest this rationale is simply a pretext.

After all, within the course of one week, the justification for the search went from “nuclear secrets” to classified documents, to videos suggesting the documents were not secure, to videos suggesting the Trump team was serendipitously moving the documents, to a confidential human source claiming Trump continued to possess presidential records, to a supposed lie by Trump’s attorney that there were no documents present at Mar-a-Lago marked classified.

No matter the excuse provided for the raid, however, the reality remains that the Biden administration launched an unnecessary grand jury criminal investigation into Trump based on a referral from a partisan archivist. And all Americans of goodwill see the obvious difference in the government’s treatment of Clinton, Obama, and Trump, proving the purpose of the investigation was “to get” Trump and not the documents.

We’re in uncharted territory when half the country doesn’t trust the FBI or Department of Justice (DOJ) to tell the truth and show us their work. We want to see how 2 + 2 = an invasion of the home belonging to the former President of the United States of America. In short, we want to see the affidavit supporting why Trump-hating Magistrate Bruce Reinhart approved the raid.

We want it now. Prosecutors say if they released it, we’d see black blocks where they’d be forced to redact and take out “classified information.” Judicial Watch’s Tom Fitton says some information is better than none.

I want it all.

The Left only used to talk about frog-marching Republicans like Dick Cheney and George Bush. Now they’re doing it. The norms have been blown up by the authoritarian Left, an out-of-control attorney general, and Biden’s FBI. If you’re sending Trump and his supporters to the Gulag, you should have to prove your case, and you should do it now.