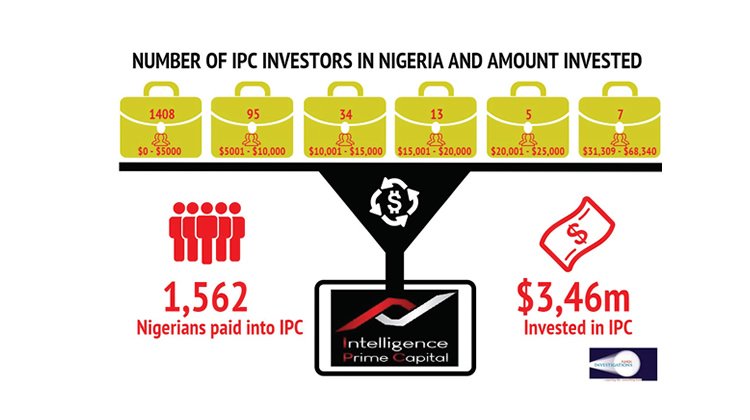 The era of investment platforms defrauding people of their hard-earned money seems to be a never-ending debacle. After weeks of poring through tons of data, documents and deploying Open Source Intelligence tools, DAMILOLA OLUFEMI  uncovers how a forex company allegedly faked an international reputation to defraud thousands of Nigerians and others globally

Abiola Abimbola, a Nigerian residing in Scotland, United Kingdom, had high hopes that his money would be safe and yield high interest when he signed up with Intelligence Prime Capital, an investment company on December 24, 2021.

The company, which claimed to be registered in Canada with licences as proof, prided itself as a trusted forex broker of international repute and a viable investment platform.

IPC’s selling point was a genius robot known as AIA BOT noted to make trading on the platform seamless.

However, an offer that readily appeared too irresistible for any shrewd investor was the guarantee of a 20 per cent weekly Return On Investment.

With the ROI acclaimed to be genuine and profits remitted without delay as at when due, Abimbola wasted no time in investing in the scheme after it was introduced to him by a trusted friend in his church.

Upon completing his registration on the IPC site, he gleefully funded his wallet with $100, which was approximately N41,200, going by the Central Bank of Nigeria’s exchange rate of N412.49 at the time.

The IT consultant claimed that the initial deposit appeared to be a lure to get him entangled and kick-started a journey that culminated in the loss of his life savings.

“I was basically shocked and upset. I wasn’t expecting it. The money I could have used for other projects or investments just went like that. The major shock in it for me was being scammed,” he lamented while speaking with our correspondent from his base in the UK.

Launched in July 2021, IPC, also known as IP Capital, PUNCH Investigations gathered, had three major ways through which investors earned on the platform.

The first was to subscribe to an Artificial Intelligence Act BOT, which is a trading robot that does the trading (buy and sell) on behalf of an investor, while the investor receives the profits.

The other way is for a registered investor to refer a new user and have the individual subscribe to the platform.

Back to Top
Close
X
Inside Darius' apartment as mystery deepens over why he was in Minnesota…RifsDarius Campbell Danesh 's sudden death aged 41 shocked the world.As further details emerged of the singer's lavish US lifestyle, fans were left asking…

X
How electricity workers locked out staff, caused blackout; FG’s 11th-hr scramble…RifsVanguardWorkers at the Transmission Company of Nigeria (TCN) have suspended a strike that began on Wednesday and caused a nationwide blackout.The grid…