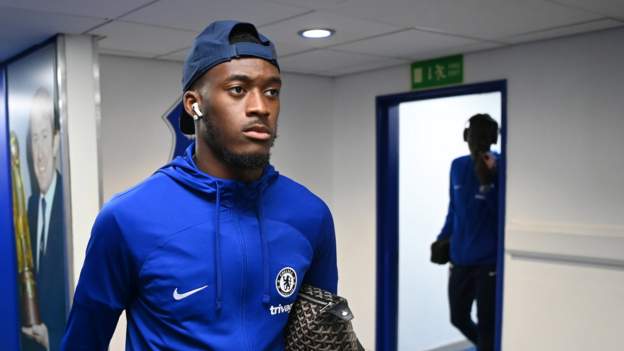 Chelsea winger Callum Hudson-Odoi is close to a loan move as he seeks more game time.

The England international has been linked with Borussia Dortmund, Newcastle and Southampton.

But other offers are being considered by Hudson-Odoi, who made 15 Premier League appearances last season and has not featured in this campaign.

It is understood Chelsea would allow a loan deal, but do not want to lose the 21-year-old permanently.

Having being left out of the squad for Chelsea’s opening Premier League game at Everton and an unused sub against Tottenham on Sunday, Hudson-Odoi’s departure would be the latest sign of manager Thomas Tuchel reshaping his attack.

Christian Pulisic has also been linked with a loan move to Manchester United, but it is understood Chelsea would not be willing to sanction a deal to a traditional rival. AC Milan have shown interest too in winger Hakim Ziyech.

The arrival of Raheem Sterling, plus a £45m bid for Everton’s Anthony Gordon, is intended to add more intensity to the forward line, particularly when attempting to press the ball.

Hudson-Odoi, capped three times by England, was close to joining Bayern Munich in 2019, before signing a five-year deal worth more than £120,000 a week.

He has struggled to become a regular at Chelsea…

Back to Top
Close
X
Britain's richest man Sir Jim Ratcliffe says he wants to buy Man Utd…English FootballSir Jim Ratcliffe, Britain’s richest man, is interested in buying a stake in Manchester United, if the Glazers are willing to sell the crisis club.Pre…