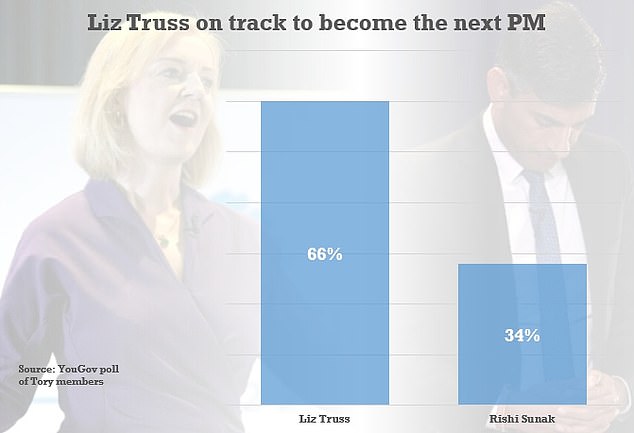 Liz Truss is poised to become PM in weeks after another poll showed she has an unassailable lead among Tory members.

The Foreign Secretary is backed by 66 per cent of the activists who will decide the successor to Boris Johnson, according to research by YouGov.

Rival Rishi Sunak only has support from 34 per cent, excluding those who are not sure. Although the 32-point advantage is slightly smaller than was found a fortnight ago, just 13 per cent are now undecided and nearly six in 10 have already voted.

However, there is also widespread regret that Boris Johnson is going – with 55 per cent saying it was wrong to force him to quit.

There is already sniping within the Tories over the bitter contest, with anger in the Sunak camp that some MPs have switched sides as Ms Truss’s bid has gathered momentum.

‘Those who switch are doing it purely for their own careers and it’s spineless. No one forgets a switcher and it tends to end badly for them,’ one insider told the Guardian.

Back to Top
Close
X
Dozens of foreign fighters eliminated in strike on Ukrainian base – Russia…More RifsRT - Daily news More than 90 mercenaries have been killed in a high-precision strike in the city of Kharkov, the Defense Ministry says Dozens of forei…

X
New billionaire emerges as possible Man United savior…More RifsRT - Daily news Jim Ratcliffe, one of the UK's wealthiest businessmen, has confirmed that he is interested in completing a takeover of Manchester Unit…