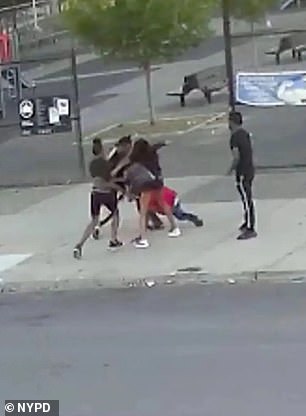 Help find these brutes: Father-of four NYC taxi driver, 52, is beaten to death by five passengers – as $15,000 reward goes out to find the two men and three teen GIRLS

This is the horrifying moment five thugs – including three teenage girls – brutally beat a New York City taxi driver to death after they tried to rob him at 6.30am.

Father-of-four Kutin Gyimah, 52, was violently punched and kicked before one of the thugs delivered a fatal blow to his head, leaving the taxi driver motionless on the sidewalk.

Yellow taxi driver Gyimah died after he chased the group, who allegedly ran out of the vehicle without paying their fare near Arverne Boulevard in Queens on Saturday morning.

He was rushed to St. John’s Hospital, where he later died.

Two male suspects, both aged 20, are now in custody, cops confirmed this morning.

Three teenage girls, aged between 13 and 16, are still being hunted by police.

One of the men who handed themselves into police was identified as Austin Amos. NYPD said Amos was last seen wearing clothing that matches that of the suspect who delivered the final, fatal blow.

Amos has six prior arrests, including for robbery, criminal mischief, criminal contempt and sexual misconduct, police said. He was accompanied by his mother when he handed himself into cops on Wednesday night.

New York State Federation of Taxi Drivers previously offered a $15,000 reward for information that would lead to an arrest following the ordeal.

It comes as yellow taxi drivers in New York are facing the burden of debt and bankruptcy after investing in taxi medallions – but failing to make substantial profits worth the price of their license certificate.

Thousands of drivers are on the brink of financial ruin, with the average debt owed on medallions by taxi drivers reaching $600,000, according to the New York Taxi Workers Alliance.

Gyimah, whose wife Abigail said she is ‘lost without him’, had four children aged eight, seven, five and three.

In footage from the nasty attack, he was seen getting out of his taxi and chasing the group of thugs on foot before they encircle him.

He was seen raising his arms to protect himself from the brutal ambush near Beach 54th Street and Arverne Boulevard, as the group continues their onslaught.

When Gyimah was able to get back his feet, a suspect, believed to be Amos, punched him in the head, knocking the father-of-four to the ground.

The five suspects then fled the scene, leaving Gyimah, who suffered a fatal head injury, lying on the sidewalk motionless.

Video shows the suspects later walking up the stairs of an apartment block.

Back to Top
Close
X
Suitcase bought in auction is opened to find dead children inside…More RifsThe remains of two little kids have been found in suitcase s sold as part of an online auction.Police confirmed today the morbid luggage that had been…