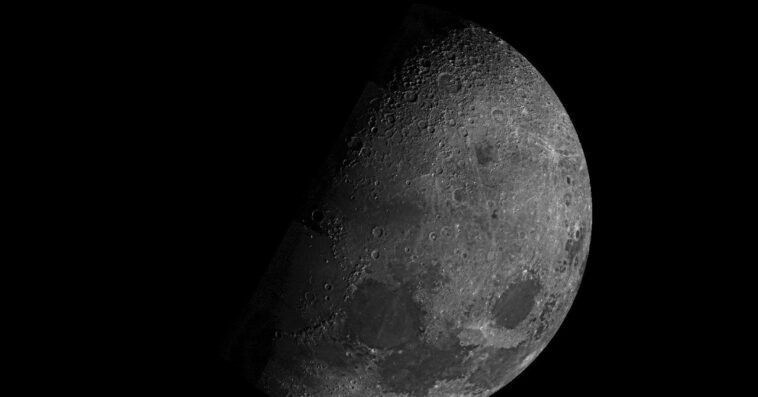 Gases trapped in lunar meteorites hint that the moon was formed out of material displaced from Earth after a planetary collision.

ROUGHLY 4.5 BILLION years ago, a primordial version of Earth covered in molten lava orbited the sun. Barely into its newfound existence, it was struck by a smaller object the size of Mars, referred to as Theia, in an explosive event. Theia was blown to pieces by the impact, while a huge chunk of Earth was sent careening into space.

The gravitational pull of the remaining bulk of our planet saw this material swirl around Earth. In a surprisingly short span of time, perhaps less than 100 years, some of that material stuck together and formed the moon.

Or at least, this is how one popular moon origin theory goes. Now, though, there’s fresh evidence to suggest that the moon was indeed created from the debris of this cosmic impact billions of years ago. The discovery of certain gases inside the moon supports the idea, and also gives us important new details on how it might have happened.

While completing her PhD at the Swiss Federal Institute of Technology (ETH) in Zurich, Patrizia Will studied six lunar meteorites recovered by NASA from Antarctica in the early 2000s. In these rocks, she and her colleagues found helium and neon trapped in tiny glass beads, which were formed in volcanic eruptions on the lunar surface as magma was pulled up from the moon’s interior. These gases, known as noble gases because they are relatively unreactive, appear to have originated on Earth, and were likely inherited by the moon “during its formation,” says Will. The research was published in the journal Science Advances.

Previous work has hinted at the giant impact hypothesis. Lunar rocks show a striking similarity to Earth rocks, suggesting a common origin. Yet there are key differences: Lunar rocks have a lighter version of chlorine, for example, pointing to a dramatic event early in the history of our two worlds that separated some material.

Most scientists now agree this event was a gigantic collision. “We are pretty set on the giant impact hypothesis,” says Sujoy Mukhopadhyay, a geochemist from the University of California, Davis, who was not involved in Will’s study. “That’s still the best hypothesis on the table.”

Following the impact, a disk of material displaced by the collision—possibly a donut of vaporized rock known as a synestia, measuring thousands of degrees in temperature—may have formed around our planet. The amount of neon and helium discovered in the lunar samples supports the theory that the moon formed in this synestia, as the relative abundance of these gases suggests they came from Earth’s mantle and were blasted into space by the impact before being fused into the interior of our satellite. Had these gases instead been transported across space into the moon by solar winds, we’d expect there to be much much lower quantities present in the meteorites analyzed.

“It’s really interesting work,” says Mukhopadhyay, noting that no study has been able to find evidence for such indigenous gases in lunar rocks before. “The concentrations are very low, so it’s very hard to detect,” says Ray Burgess, a geochemist from the University of Manchester and a reviewer of Will’s study. “It’s a big step forward.”

Back to Top
Close
X
New evidence supports theory that the moon was once part of Earth…ScienceSputnik News The Moon has been studied by humans since we first looked up at the night sky, but its origins remain a mystery. Further evidence support…

New evidence points to the moon once being part of earth

X
How just touching a smoker's clothes may raise cancer risk – Scientist…ScienceThe dangers of secondhand smoking have been known for decades, but now scientists are warning about a new threat — thirdhand smoke.A study in the US f…