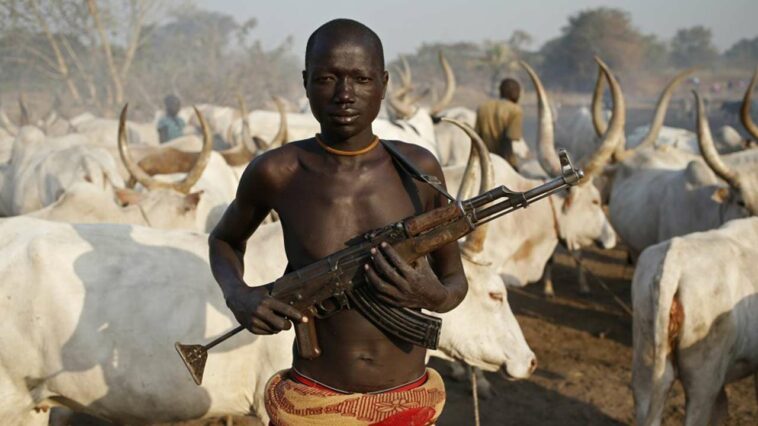 The emergence of President Muhammadu Buhari a Fulani born former infantry Major General of the Nigeria Army to the office of the Nigerian President in 2015 has without doubts precipitated an upsurge in the organised, carefully choreographed and massively executed civil war of the Fulani pastoralists against native farmers in many villages, towns and cities all across the nation.

This war has birthed in the South, the North, the East and the West and this well coordinated serial bloodbath has led to thousands of casualties and have left at least 3 million internally displaced citizens in Southern Kaduna State and Benue State. These killings have rendered hundreds of thousands of Nigerians as orphans.

In this piece which is an addendum to a previous article I did asserting that indeed Nigeria has a ‘Fulani Problem’, I will systematically list out, not in any particular order, the execution of these wars launched by herdsmen against everyone that owns a farm just as we must begin by stating emphatically that President Muhammadu Buhari’s government has aided and abetted these attacks by failing to take decisive steps to stop it, arrest the culprits and deliver justice to mass killers.

President Buhari’s government has actively done two things: attempting to change the narrative of aggression against the perpetrators of these wanton killings by dismissing these wars as mere conflict between herders and farmers. Second, the President has tried to justify the Fulani aggression by blaming states that tried to take legislative positions to control the open grazing of cows which is the most immediate trigger for these massive killings by Fulani pastoralists just as the current administration due to the selfish ethnic agenda of advancing the parochial interest of the pastoralists, has illegally funded different agricultural settlement schemes to benefit only the pastoralists including the attempt to settle the Fulani pastoralists in strange lands all over the geopolity of Nigeria using public fund.

Despite the stiff resistance of Nigerians in their millions, this government has continued to implement these unconstitutional measures which are stoking further killings of citizens by even some alleged imported Fulani pastoralists from Central African Republic, Niger and Cameroun.

The Human Rights Writers Association of Nigeria HURIWA, recently described as wicked and insensitive, the branding as mere conflict, the aggression and killings of southern farmers by Fulani herders.

HURIWA in a statement, said the matter is not a conflict and urged the Federal Government to curb the criminality of herders who are now on the rampage in the country, kidnapping residents for lump ransom and taking over farmlands of aboriginal dwellers.

The group said emphatically that nomadic Fulani herdsmen are the aggressors and not supine and peacefully accommodating host farmers.

Recall that the Secretary to the Government of the Federation, Boss Mustapha, recently indicated in a memo to the Minister of Agriculture and Rural Development, that the Federal Government would launch a ranching programme to address the “clashes” between herders and farmers in Abia, Delta and Kwara states.

HURIWA said, “It is hypocritical and wickedly insensitive for the government to brand as ‘clashes’, the intentional killings of innocent farmers by aggressive farm-grabbers known as Fulani herders.’’

The association is unhappy that the Federal Government due to ethnic agenda in favour of the ethnicity of the President and so much of those who hold the top positions in all internal security institutions who are all without exception Fulanis, the government is attempting to sell the dummy and the contrived story that the Fulani pastoralists are really not the aggressors but are simply one side of a two sided war between herders and farmers.

This wicked fallacy, which the government has consistently sponsored in the media should be resisted, rubbished and debunked. There is no such thing like that. There is a war of Fulani herdsmen against the rest of Nigerians in their blind pursuit for territorial capture of native people’s lands for the benefit of their cows and the Federal Government is actively turning blind eyes to these schemes of the devil and the slaughter of farmers.

In Southern Kaduna alone, Fulani herders have so far captured more than 100 Christian communities. So it is doubtful if President Buhari could change his mindset and stop the ever expanding wars of Fulani herdsmen against other Nigerian community of farmers.

The sad truth is that since the onset of this administration, the Fulani pastoralists have launched wars to take lands of other communities even far away from the deep North. On September 21, 2021 the Paramount Ruler of Atyap Chiefdom, also known as ‘Agwatyap’, Sir Dominic Yahaya, raised the alarm over sustained Fulani attacks which have claimed over 50 lives of villagers under his domain which include Zango-Kataf in Southern Kaduna within a month.

The killings, the monarch said, included heavily pregnant women and children, claiming also that 254 houses and seven churches were destroyed by the herdsmen during the sustained attacks

On August 5, 2021 the Evangelical Church Winning All, also known as ECWA expressed disappointment over the killings and destruction of houses, including its churches in Bassa Local Government Area of Plateau State.

Recall that around May 5, 2018 a village in Southern Kaduna, Fulani herdsmen reportedly attacked Gwaska in Birnin-Gwari Local Government Area.

In a statement- e-mailed to The Trent by PR Nigeria on Sunday, May 6, 2018, the community’s vigilant group, Birnin-Gwari Vanguards For Security And Good Governance, said that over 45 bodies of the victims of the invasion have been recovered. The Irigwe Development Association and the Irigwe Youth Movement of Miango District in Bassa LGA of Plateau State disclosed that suspected Fulani herdsmen have killed 41 of its people in repeated attacks in several communities between February and May 2021. The groups also said the deaths have resulted in many orphans and widows in the affected communities.

They disclosed that 25 houses were burnt and farms with crops were also destroyed in 12 villages during the period under review. On July 14, 2021, another attack was recorded in Southern Kaduna with 33 residents killed and properties worth billions destroyed by Fulani herders.

A statement issued by Luka Binniyat, the spokesperson of Southern Kaduna Peoples Union, said about four churches were burnt and 215 homes razed down in the attacks over the past six days. These herders in their quest to conquer territories spread across the country ventured into Ebonyi State in the South East of Nigeria where 7 persons were killed on June 1, 2021.

The attack led to the death of over 30 indigenes of Ebonyi while some survivors are still receiving treatment at the Alex-Ekwueme Federal University Teaching Hospital, Abakaliki. Fast forward to March 29, 2022 when a Deeper Life Pastor, 3 others were killed in fresh herdsmen attack in Benue communities.

The Church in Kaduna State says more than 27,000 people have been displaced from their homes since the renewed attacks by suspected Fulani herdsmen against natives of the southern part of Kaduna State. Around April 12, 2022, Fulani herdsmen killed 23 people in a fresh attack in two communities, Mbadwem and Tiortyu of Benue.

It was reported that suspected herdsmen killed 15 people in an early morning attack in a Catholic Church in Benue State. The attack occurred in Ayar-Mbalom, a community in Gwer East Local Government Area. Recall too that in 2015 precisely on March 18, came the media reports and outrage that trailed the Agatu killings.

These killers also struck in Plateau State killing a pastor, his wife, and their three children as reported around August 30, 2018.

In that attack, over eight persons were killed when suspected Fulani herdsmen attacked churches and houses in Barkin Ladi Local Government area of Plateau State. December 25th being a traditional joyful time in Christendom, the killers went on rampage in Anambra killing a farmer.

And so tension mounted in the sleepy community of Anaku in Ayamelum local government area of Anambra State, following the reported killing of a farmer in the area by herdsmen. In 2021 September 21st one person was killed, others injured as gunmen attack a church in Kaduna.

Recall that the mass burial of victims killed by suspected Fulani herdsmen in several communities in Bassa Local Government of Plateau State was disrupted by a fresh attack, which left 25 persons dead.

Those to be given mass burial that day were murdered between Thursday, March 8, 2018 when President Muhammadu Buhari paid an official visit to the beleaguered state, and Sunday, March 11. In Adamawa State, herdsmen around January 21, 2018 killed 4 persons.

X
What Liz Cheney sacrificedOpinionNational ReviewThere is a legitimate and respectable case to be made both for and against Cheney’s choices.First, the pro-Cheney case starts with the …