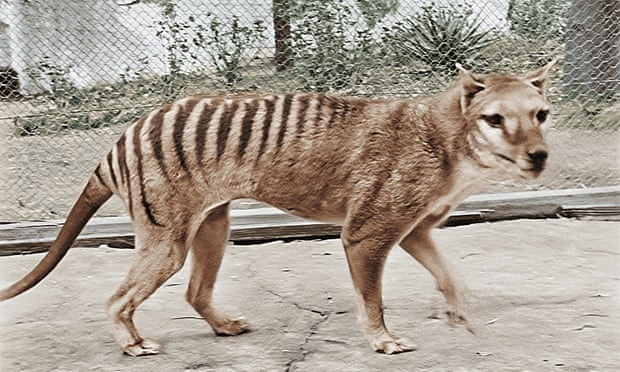 Scientists in Australia and the US have launched an ambitious multimillion-dollar project to bring back the thylacine, a marsupial that died out in the 1930s, and reintroduce it to its native Tasmania.

The thylacine, also known as the Tasmanian tiger, is the second undertaking by Colossal, a Texas-based biotechnology “de-extinction” company that last year announced it planned to use genetic engineering techniques to recreate the woolly mammoth and return it to the Arctic tundra.

Its new project is a partnership with the University of Melbourne, which earlier this year received a $5m philanthropic gift to open a thylacine genetic restoration lab. The lab’s team has previously sequenced the genome of a juvenile specimen held by Museums Victoria, providing what its leader, Prof Andrew Pask, called “a complete blueprint on how to essentially build a thylacine”.

The thylacine was Australia’s only marsupial apex predator. It once lived across the continent, but was restricted to Tasmania about 3,000 years ago. Dog-like in appearance and with stripes across its back, it was extensively hunted after European colonisation. The last known survivor died in captivity in 1936. Despite hundreds of reported sightings in the decades that followed, and some quixotic attempts to prove its ongoing existence, it was officially declared extinct in the 1980s.

The scientists aim to reverse this by taking stem cells from a living species with similar DNA, the fat-tailed dunnart, and turning them into “thylacine” cells – or the closest approximation possible – using gene editing expertise developed by George Church, a professor of genetics at Harvard Medical School and Colossal’s co-founder. New marsupial-specific assisted reproductive technologies will be needed to use the stem cells to make an embryo, which would be transferred into either an artificial womb or a dunnart surrogate to gestate.

Pask said the partnership was the most significant contribution ever made to marsupial conservation in Australia as more than 30 scientists worked to accelerate the “massive grand challenge” of bringing the thylacine back from the dead. He believed the first joeys could be born in 10 years.

Colossal’s chief executive and other co-founder, the tech and software entrepreneur Ben Lamm, was more bullish, believing it was possible in less than six years, the timeframe that the company had set itself to produce the first set of mammoth calves.

“I think it’s highly probable this could be the first animal we de-extinct,” Lamm told the Guardian.

The challenges faced by the project are significant, and the scientists acknowledge several breakthrough steps will have to land for it to succeed. On reproductive technology, Pask said: “We are pursuing growing marsupials from conception to birth in a test-tube without a surrogate, which is conceivable given infant marsupials’ short gestation period and their small size.”

If successful, the plan would be to introduce the animal in a controlled setting on Tasmanian private land with an eventual goal of returning it to the wild. The researchers said returning an apex predator could help rebalance the state’s ecosystem. But Pask said they also hoped that their work could have a wider impact in helping to address an extinction crisis.

He said the world was changing too rapidly for existing conservation techniques to save many threatened species, pointing to the catastrophic impact on Australian wildlife from bushfires. “We have to look at other technologies and novel ways to do that if we want to stop this biodiversity loss,” he said. “We have no choice. I mean, it will lead to our own extinction if we lose 50% of biodiversity on Earth in the next 50 to 100 years.”

He said the team hoped to address concerns about the genetic health of the species – an issue with the now extinct population – by sequencing the genomes of between 80 and 100 individuals, and that dealing with genetic diversity was “relatively straightforward” compared with other challenges the research faced.

The announcement has received a mixed response from conservation biologists. Corey Bradshaw, a professor in global ecology at Flinders University, believed it was unlikely to be successful. ‘Even if you can do it [in the lab] – and I have my doubts about that – how do you create the thousands of individuals of sufficient genetic variation you need to create a healthy population?”

Euan Ritchie, a professor in wildlife ecology and conservation at Deakin University, said other outstanding questions included whether the project could do more to help threatened species than existing conservation genetics. He said turning a lab-created animal into a wild population would be an “enormous challenge”, but the financial support for de-extinction research should not be seen as a “zero sum game”.

“Obviously we want to, as much as possible, save the current species we have, but if someone wants to fund bringing back the thylacine and they don’t want to fund something else, then why not? If we do learn more about genetics that can be used to protect existing species, then all the better.”

This article originally appeared in The Guardian UK

Back to Top
Close
X
Quantum Physics could finally explain consciousness, scientists say…ScienceWe asked a theoretical physicist, an experimental physicist, and a professor of philosophy to weigh in. By Robert Lea During the 20th century, researc…

X
New evidence supports theory that the moon was once part of Earth…ScienceSputnik News The Moon has been studied by humans since we first looked up at the night sky, but its origins remain a mystery. Further evidence support…