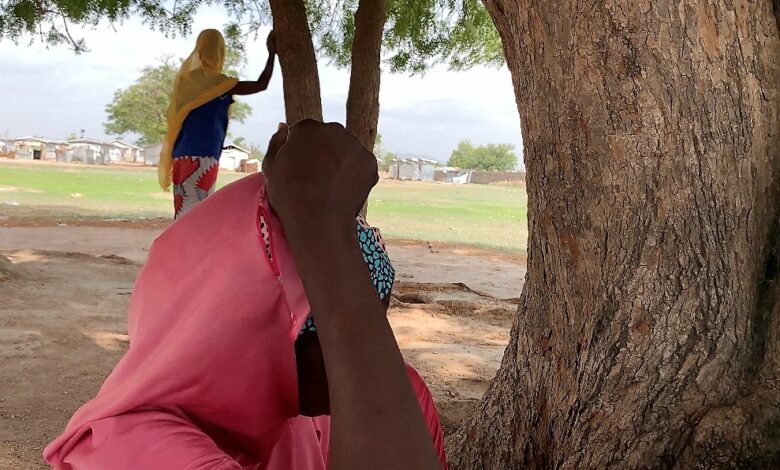 The fullness of Maryam Abba’s gruff voice shrinks to a whisper as she describes the itching and burning sensation she usually feels in her vagina. “Kamar cinnaka [like fire ants],” she says in Hausa, “like a bunch of them are stinging me in the place at once. Whenever it starts, I have to leave everything I am doing and go to my tent to soothe it.” It is too much to bear.

She says it only began when she started living in Malkohi IDP camp located in Yola, Adamawa State, and it came from using the unsanitary toilets in the camp.

Maryam is 37 and a mother of two. She relies on finding manual labour to feed herself and her children, but for fear that the itchiness could occur while at work, she usually stays back and waits until it stops.

“We will not have anything to eat if I do not go to look for work, but I won’t be able to work because it [the itching] will not allow me to.”

The widespread devastation from the insurgency in northeastern Nigeria has left thousands of people displaced and living in terrible conditions. While most IDPs struggle with hunger and starvation, poor water and sanitation hygiene has stirred outbreaks of diseases such as cholera that have also resulted in deaths.

But a peculiar situation pans out for women in Malkohi camp who contract vaginal infections, which they call “toilet infections”, due to how unhygienic and overcrowded the latrines are.

What is toilet infection?

In the medical sphere, there is no such thing as a toilet infection. Dr Ishak Musa, a gynaecologist at the General Hospital, Gwarimpa, says itching and burning sensation with thick discharges are usually symptoms of Vaginal Candidiasis, an infection caused by Candida, a type of yeast and fungus.

Ideally, Vaginal Candidiasis cannot be contracted by using toilets. Dr Musa, however, explains that it is possible in the case of overcrowded toilets in IDP camps.

“Vaginal Candidiasis is usually gotten through contact like when women share their clothing such as underwear. It can also be gotten through sexual intercourse, but it is not classified as a sexually transmitted infection (STI),” he said.

He stresses that IDPs who face extreme hunger often lack a proper diet, which could weaken their immune system and makes them prone to various types of diseases and infections even beyond Candidiasis.

In the absence of clinics…

Although Maryam knows she is not alone and other internally displaced women have similar symptoms, she feels embarrassed asking for medication. She tells this reporter she had never had to describe her condition the way she did.

But she has a way of easing her discomfort. She would drench a clean cloth with a potash and water mixture and then insert it into her vagina for a few minutes. “Sometimes I have the water mixture in a kettle which I use to wash myself after I urinate.”

Potash is a potassium-rich salt that is mined from underground deposits formed by evaporated sea beds. Although there are different kinds, the one Maryam is referring to is edible and usually used in cooking in parts of West and Central Africa.

Dr Musa says using potash is not an appropriate method of treating candidiasis and has tendencies to impair the reproductive system. The risk of contracting the infection can rather be reduced through sun drying underwear and practising better hygiene. “It can only be treated with medication.”

Habiba (not real name) is another woman in the camp with the same health challenge. She says she has simply stopped going to the toilet and uses a potty inside her tent, emptying it in the latrine when it’s full. “I only go to that place [the toilet] when I need to bathe.”

Discussing toilets seems almost displeasing to the women in the camp as they explain that the lack of clean toilets has gradually become worse over the years because when they newly arrived, there were enough facilities and they often cleaned them in a scheduled and organised manner.

“We were divided into groups. Like one group would use one toilet and we would clean it ourselves and maintain it like that. It wasn’t too dirty most of the time,” Habiba explains. But with the onset of the rainy season, which floods the camp, many of the latrines caved in.

Currently, only 12 toilets are functional in the IDP camp despite housing over 1,240 people. Most IDPs have resorted to open defecation, which has been shown to increase the risk of sexual abuse among women.

According to the Displacement Tracker Matrix (DTM) of the International Organisation for Migration, 82 per cent of toilets and WASH facilities in camps across Adamawa have been described as dysfunctional and unhygienic.

Anxious to use toilets

38-year-old Halima Abdullahi says she is often gripped with an unusual dread of using the toilets for fear of infection. She has never experienced the uncontrollable itchiness the women in the camp often complained about, but she remains careful in the way she uses the latrines.

As Halima sits across from this reporter, she describes with her hands how she uses the toilets. “Let’s say this is my private part,” she says, pointing to the loose skin between her thumb and forefinger. “I  make sure I tighten it when I squat. If you do that, the urine will not splash back into the vagina. That is one way.”

She proceeds to show another method, which she says was easier for her daughters to adopt. “I cup my two palms together and pee into it. It also prevents it from splashing back.”

Dr Musa agrees that this method could indeed prevent Vaginal Candidiasis, especially where a splash is involved. “Theoretically, it’s possible. Germs of this Candida can be spread on the floors of pit latrines that several people use; if it can splash back into the vagina, infections can occur.”

Halima says she also covers her vagina with her palm when she wants to defecate. Although she believes she is lucky to not be amongst the displaced women who continue to struggle with this infection, Dr Musa says some women are reservoirs of the infection. Though they do not experience any symptoms, they could spread them.

This story first appeared in HumAngle

Back to Top
Close
X
Beware! Adulterated vegetable oil unhealthy for you…HealthHigh cholesterol fat in vegetable oil has been a recurring cause of heart failures and other health complications, a development which has continued t…

‘It feels like fire ants are stinging my genital’

X
REVEALED: Little-known benefits of morning sex – from feeling more productive to…HealthWhen it comes to having sexual intercourse, many will have a preferred time to do it – whether it's in the morning, afternoon or evening. But experts …