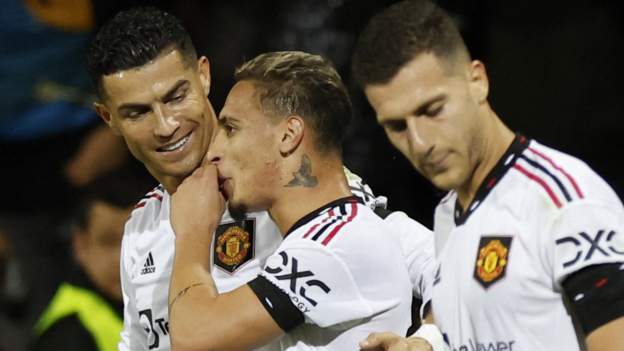 Cristiano Ronaldo ended his barren spell with the first Europa League goal of his career as Manchester United earned victory at Sheriff Tiraspol.

Erik ten Hag’s men suffered defeat at Old Trafford in their Group E opener against Real Sociedad but responded by claiming all three points in Moldova.

The Red Devils opened the scoring in the first half as a lovely team move was coolly finished off by Jadon Sancho from Christian Eriksen’s reverse pass.

Sancho, who was left out of the England squad earlier in the day, came close to a second but his low shot was brilliantly cleared off the line by Sheriff captain Stjepan Radeljic on the stretch.

But United did double their advantage before half-time courtesy of Ronaldo’s penalty, awarded after Patrick Kpozo tripped Diogo Dalot in the box.

Ronaldo could have taken his tally to 700 club goals but side-footed over from the edge of the area while at the other end, Sheriff could not force David de Gea into any meaningful saves.

In the group’s other game, Real Sociedad made it two wins from two with a 2-1 victory over Neil Lennon’s Omonia Nicosia.

United’s revival following a poor start to the season was brought to a halt at home by Real Sociedad last week, but the side got back to winning ways with a professional job against Sheriff.

Portuguese star Ronaldo played a key part in the triumph, having requested to leave Old Trafford during the transfer window for Champions League football, but ending up staying as no club came in for his services.

The 37-year-old had not scored in his previous eight games for United, a run stretching back to the end of last season, but he showed signs of ending that goal drought when he blazed over from an angle.

He did get off the mark of the campaign by slotting in a spot-kick – which was the 699th club goal of his career – but will not get the chance add to that until 2 October against rivals Manchester City, as Sunday’s scheduled Premier League against Leeds has been postponed.

Ten Hag’s squad will then be tested to its limits after the international break with a gruelling period of 13 games in the space of 43 days before the season stops in November for the Qatar World Cup.

The visitors started slowly in the Moldovan capital of Chisinau, the match being played there for security reasons, but netted with their first real attack of the contest.

Winger Sancho has been in good form recently but failed to make the Three Lions squad for the forthcoming Nations League matches against Italy and Germany and his World Cup place is now in serious doubt.

But he sent manager Gareth Southgate a reminder of his capabilities by turning a defender and calmly converting his third goal of the season and should have had another but for Radeljic’s last gasp interception.

United were in control of the contest but could not add to their tally in the second half, with captain Bruno Fernandes’ first-time strike straight at goalkeeper Maksym Koval.

Sheriff unable to repeat past heroics

Sheriff caused one of the biggest shocks in European football history last season when they defeated eventual winners Real Madrid in the Champions League group stage.

Many of that squad have now departed, including manager Yuriy Vernydub, who left the club earlier this year to join Ukraine’s territorial defence following February’s invasion by Russia.

Back to Top
Close
X
PSG come from behind after Maccabi Haifa scareUncategorizedLionel Messi, Neymar and Kylian Mbappe all scored as Paris St-Germain survived a scare to beat Maccabi Haifa.Tjaronn Chery gave the Israeli side a sur…

X
UNDERCOVER: How Bauchi health workers connive with drug vendors to divert, sell …UncategorizedOver eight months after the death of his wife, Ado Musa sheds tears on his cheek whenever he recalls what he described as Rahina Abdullahi’s painful e…