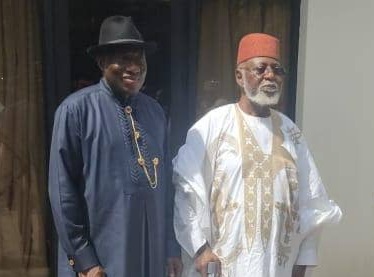 Jonathan met the former leaders in Minna, Niger State. He was received at about 1.30pm at Minna International Airport. He spent about one hour each in the residences of the former presidents.

Recall that former president Olusegun Obasanjo, had also met with the two former heads of state, barely two weeks ago in Minna.

Speaking to Journalists after his meeting with Abubakar, Jonathan urged Nigerians to elect leaders who will take national interest above self aggrandisement.

The former president said “We all wish our country well, especially for the young people. Elections are coming. They have to select the person you believe will lead us well, serve us well, the leader is also a servant…

Back to Top
Close
X
2023: Peter Obi’s presidential ambition meets hurdle as lawsuit emerges…Political LandscapeNo fewer than nine lawyers have filed a suit before the federal high court in Lagos to place a halt on the proposed rally of Labour Party’s flagbearer…