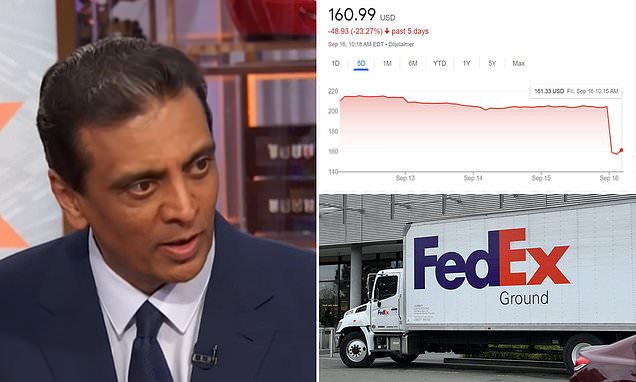 The CEO of FedEx has issued a grim warning, saying that he believes a worldwide recession is looming after the company saw a sharp decline in shipping volume in recent months.

In an interview with CNBC on Thursday, FedEx CEO Raj Subramaniam said ‘I think so’ when asked whether the economy is ‘going into a worldwide recession.’

‘But you know, these numbers, they don’t portend very well,’ added Subramaniam, who blamed the company’s dismal new profit projections on a broader decline in economic conditions.

Shares of FedEx plunged 23 percent at the opening bell on Friday, after the company said demand for shipping dropped sharply at the end of August and predicted that the slowdown would worsen in the current quarter. ..

X
Where will Queen Elizabeth be buried — and who will she be buried next to?…NewswireRifnote Queen Elizabeth II will be laid to rest Monday not far from her late husband Prince Philip and other generations of her royal ancestors at the…