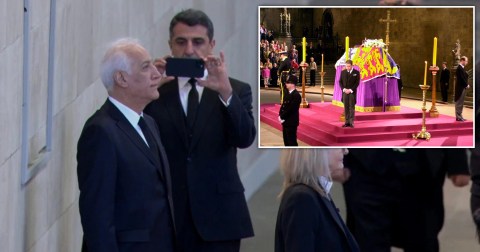 The Armenian president appeared to have broken official guidance after taking a picture inside Westminster Hall during the Queen’s lying in state.

Vahagn Khachaturyan was seen posing for a snap in front of Her Majesty’s coffin from the VIP walkway.

An aide took his picture using a mobile phone.

The government guidance says people should not film, photograph, use mobile phones or other handheld devices in the security search area or within the Palace of Westminster.

A source told the Sun: ‘Everyone has managed to follow those rules to the very letter – apart from this one individual.’

It comes as the King and Queen Consort are set to host world leaders and official overseas guests at Buckingham Palace today, in what the King’s spokesman described as an ‘official state event’.

Around 2,000 heads of state, dignitaries, presidents, European royals, and other key figures have been invited to the Queen’s funeral.

The public continued queuing for the final day of the lying in state in Westminster Hall, where the late monarch’s coffin will remain until 6.30am tomorrow.

People have been warned not to set off from their homes to join the queue as it is due to close later on Sunday.

The Department for Culture, Media and Sport (DCMS) said: ‘A decision will be taken today on when entry to the queue for Her Majesty The Queen’s Lying-in-State will close as it reaches final capacity.

‘Queue times are already 13.5 hours and may increase.

‘To avoid disappointment please do not set off to join the queue.’

At 8pm, the country will observe the silence to remember the Queen, with people invited to mark the occasion privately at home, on their doorstep or street, or at community events and vigils.

Big Ben will toll to start the beginning of the national moment of reflection and the bell will be struck once more at 8.01pm as it ends.