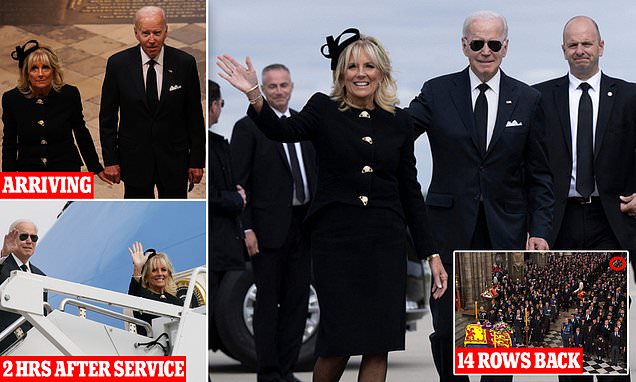 ‘If I were president, they wouldn’t have sat me back there’: Trump MOCKS Biden for being sat 14 rows back at the Queen’s funeral – and says there is ‘no respect’ for the US two years after leaving office

Donald Trump has mocked Joe Biden for being sat 14 rows back in at the Queen‘s funeral and said if he was president he would have been moved closer to the front of the audience of 2,000 mourners.

The former President said on Truth Social that it showed there is ‘no respect’ for the United States anymore – and insisted it was a good time for Biden to get to know ‘leaders of certain Third World Countries’.

Trump did not attend the service bidding farewell to Britain’s longest reigning monarch – as invites were limited to current heads of state.

However he has paid multiple tributes to Her Majesty, including a moving piece for DailyMail.com praising her grace, charm, nobility’.

In his first reaction to the funeral, he noted Biden’s position in Westminster Abbey behind the Polish president.

‘This is what’s happened to America in just two short years. No respect! However, a good time for our President to get to know the leaders of certain Third World countries.

‘If I were president, they wouldn’t have sat me back there—and our Country would be much different than it is right now!

Biden flew back to the United States on Air Force One straight after the ceremony – before the Queen’s committal and burial – after he was given an aisle seat among the 2,000 mourners from around the world at Westminster Abbey.

But he didn’t rank ahead of other royals: the Emperor and Empress of Japan were seated in the 6th row, behind European royals and the King of Jordan.

The Bidens arrived at the state funeral via their presidential car The Beast in a private motorcade while other world leaders rode together in buses. American security protocols for the president are strict and require him to travel in the armored car with security vehicles surrounding him.

During the hour-long memorial service, the president sat directly behind Andrzej Duda, the Polish leader, and directly in front of Petr Fiala, the prime minister of the Czech Republic.

Jill Biden sat next to Ignazio Cassis, the president of Switzerland. 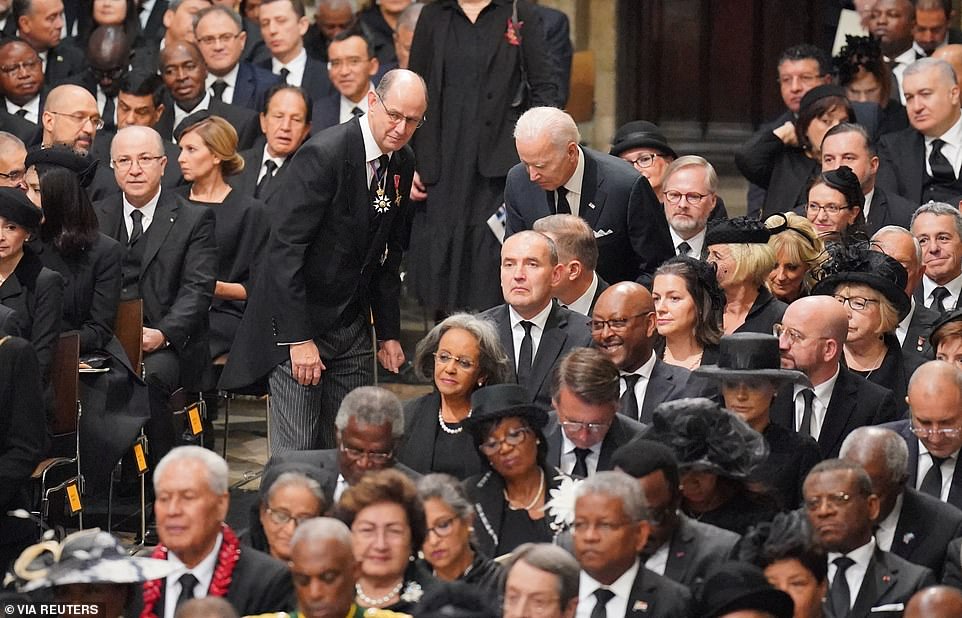 President Joe Biden takes his seat along the aisle at Westminster Abbey, 14 rows back from the front

Back to Top
Close
X
Queen’s funeral seating plan: Joe Biden shunted 14 rows back, behind the Polish president…United StatesAs the most powerful man on the planet, Joe Biden is normally front and centre of any gathering of world leaders. Not so when it comes to British Roya…