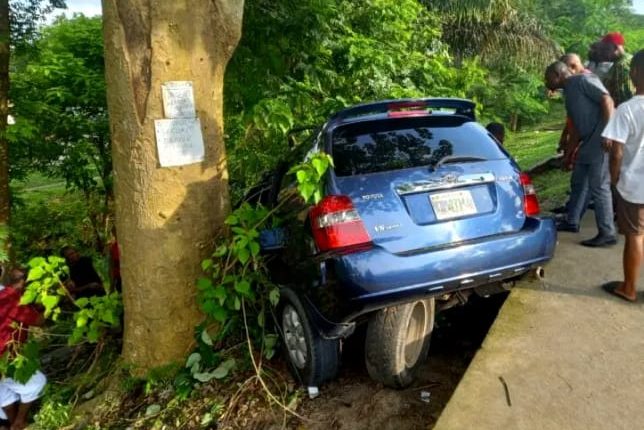 A yet-to-be-identified woman has been involved in a fatal motor accident on Sunday evening in Calabar, Cross River State while allegedly chasing her husband on the highway.

The lady was said to have died minutes after being rushed to the hospital.

Eyewitnesses said the lady had allegedly spotted her husband at a Shopping Mall with another woman who she suspected was dating her husband and decided to pursue them when her husband rushed into his car with the allegedly with the lady.

An eyewitness explained that “The lady saw her husband at a shopping mall with another woman in the car, so she hurriedly drove to double cross them. The husband saw her car and zoomed off, so the woman allegedly became aggressive.

“I was just driving behind them and, in less than three minutes, I saw her involved in the accident. She was unconscious at the point of death. “

Minutes later, the lady was later confirmed dead due to the injuries she sustained from the crash.

He said the incident was caused by excessive speeding.

“Though the woman was immediately rushed to a nearby hospital, she died minutes later due to the injury sustained from the incident,” the sector commander said.

This article originally appeared in Tribune

X
Mother abandons her month-old baby in vehicle in Anambra…Last PostAn Unknown Woman in Anambra State abandoned her one-month-old baby boy with another passenger in a commercial bus along Zik’s Avenue, Amawbia in Anamb…