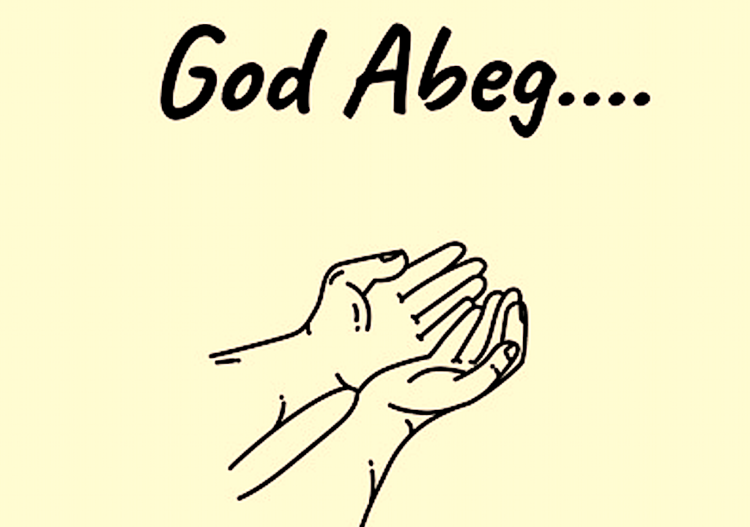 If we do not beg for a solution to corruption, God abeg may only be a psychological comfort without striving to make changes.

Nigeria is in trouble, and its systems are cankerworms eating away at the people’s possible potential and hope. If there is no decisive developmental fumigation of those cankerworms, the nation may beckon to its damning mayday. When physical efforts fail to solve physical problems, it is only logical to seek metaphysical means, which explains the muttering of God Abeg for God to come through for one. But despite these prayers, has God forsaken Nigeria that even God Abeg is coming with the similar possibilities of placing a bet?

The sociolinguistic property of God Abeg became bare after Oludare Alaba’s hilarious video hovered around social media platforms and raised continuous conversations. Alaba, a graduate of Ladoke Akintola University of Technology, Ogbomoso, returned to the school languishing that his “certificate is worthless.” From his story, Alaba is not a lazy Nigerian young man; he has no one to support him. He has searched for a job and farmed, yet the proverbial light at the end of the tunnel has remained elusive. Alaba’s travail was worsened by the destruction of his farmland by unchecked nomads, whose cattle saunter and feed on cultivated farms. Only God knows how many God Abegs Alaba would have cried out before giving up hope and returning his certificate to retrieve the school fees he had paid. Alaba, you cannot return your certificate for a refund!

God Abeg means “God please” and is a clichéd prayer to God for help in difficult situations, especially those beyond one’s ability or control. In many instances, it is not that one has decided to shift the onus of responsibility to the Almighty or that one has not attempted to make efforts that would resolve the situation. No, it is that despite all these, nothing is changing and one remains trapped in the labyrinths of hopelessness. Afterwards, people resort to chanting soft but resonating God Abeg. Oludare Alaba’s experience captures this situation, and he is not the only one in this misery. About 89 million Nigerians who live below the poverty line and the millions of underemployed and unemployed Nigerians who strive to succeed and fail all chant God Abeg!

Nigerians are characterised by their will to survive against all odds. From the Mai Gida who cultivates farms and rears cattle, to the young Aboki scavengers who scour garbage and refuse dumps from street to street, to the Nna who goes across regions to sell bales of clothes, to the unrelenting traders in Katangora and Alaba markets of Lagos, to Iya Risi who runs a small food Buka from dawn to dusk, to the hustlers who hawk in traffic and the brilliant innovators who are blazing the trails towards securing the future of Nigeria, one would be convinced that the country has enough energetic human resources that could change the economy of any nation. However, in spite these attributes and the people’s honest toils, their situations do not reflect their diligence.

People like Alaba are living evidence that working and making efforts are not Nigeria’s problems, but whether those efforts can pay their bills. After spending donkey years in school with a high possibility of falling into the ambush of ASUU strikes or several of those years in the apprenticeship of a trade or vocation, one might come to a saddening realisation that those time investments may be flushed down the drain by the country and its murderous systems. Dejected, the people go down rambling softly, God abeg!

The country has a terrific labour market capable of killing any charted career path. For those who have been able to acquire educational qualifications, job opportunities have become a luxury only for the rich and connected. The National Bureau of Statistics currently put the rate of unemployment in Nigeria at 33.3%, one of the highest in the world. The rate is quite worse among the youth; 42.5% of the youth, who form about 60% of the population, are unemployed.

It is one thing to be employed and another to be gainfully employed. About 22.8% of the Nigerian population are underemployed, which means that where there is work, there is a chance that they are below the qualification of job searchers. The World Bank stated that only 17% of Nigerians hold wage jobs. Juxtaposing the average salary and living wage of about N43,200 to the nation’s cost of living, the cost of living is 5.3 times higher. God Abeg!

Back to Top
Close
X
No Shettima, Nigeria does not need another ruthless leader…OpinionBy Abimbola AdelakunOne hackneyed fallacy regularly bandied around in the Nigerian social media spheres is that people fail to retrospectively learn f…