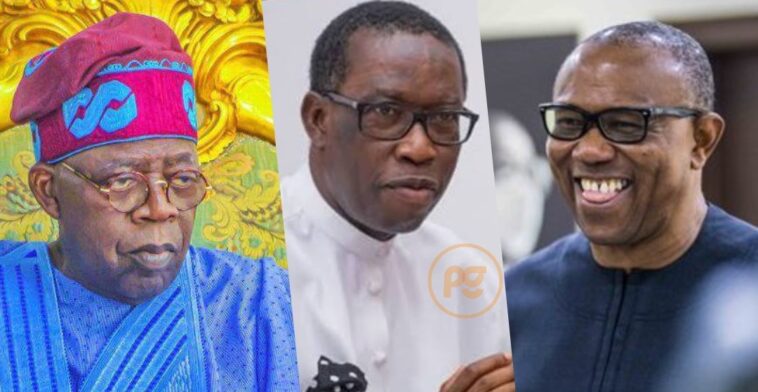 Ifeanyi Okowa, vice-presidential candidate of the Peoples Democratic Party (PDP), has belittled candidates of the All Progressives Congress (APC), Bola Tinubu, and that of the Labour Party (LP), saying the duo are no match for him.

Mr Okowa is the running-mate to PDP’s Atiku Abubakar.

He said he has performed better as governor of Delta than Messrs Tinubu and Obi when they held offices as governors of Lagos and Anambra state respectively.

“When Mr Peter Obi was a governor, he didn’t create half of the jobs Governor Okowa created in Delta State. Tinubu as a governor then can not compete with Governor Okowa Job Creation Programs,” Mr Okowa said in a short message released by his media aide, Ossai Ovie Success on Thursday.

Messrs Tinubu and Obi have been campaigning on their various achievements while in office.

Mr Tinubu specifically has reeled out how he had been able to transform Lagos, Africa’s most populous metropolitan city, during his eight years tenure as the governor of Lagos

Mr Tinubu, notoriously regarded as the “Lagos landlord”, street parlance among his political critics, has continued to peddle his Lagos influence to woo support ahead of the 2023 presidential election.

Speaking further, Mr Okowa claimed that he has created more jobs and empowered youths who have created jobs for others in all Local Government Areas of the state.

Back to Top
Close
X
More than 30 migrants dead, more than a dozen rescued in Syrian waters…In the NewsSyrian authorities have found 34 bodies and rescued more than a dozen migrants off the coast of the northern port city of Tartus on Thursday suspected…

X
Abuja boat mishap: Fishermen recover 3 corpses, 4 hospitalised…In the NewsThree corpses among the five people that drowned while escaping from a bandits’ attack at Chakumi village in Abaji Area of the FCT have been recovered…