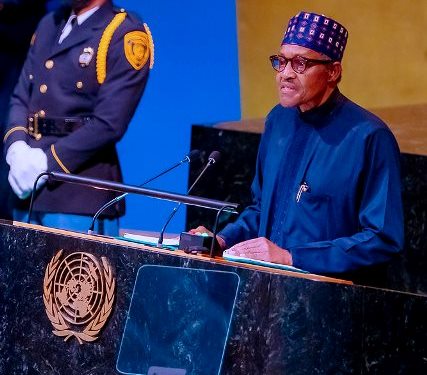 President Muhammadu Buhari has said the danger of escalation of the war in Ukraine further justifies Nigeria’s resolute calls for a nuclear-free world and a universal Arms Trade Treaty.

He, therefore, demanded that world leaders must find quick means to reach consensus on the nuclear non-proliferation Treaty with related commitments by nuclear weapon states.

In a speech monitored in Abuja, Buhari said the war would have adverse consequences on all, hindering the capacity of the international community to work together to resolve conflicts elsewhere, especially in Africa, the Middle-East and Asia.

“Indeed, the ongoing war in Ukraine is making it more difficult to tackle the perennial issues that feature each year in the deliberations of this Assembly.

“Issues such as nuclear disarmament, the right of the Rohingya refugees to return to their homes in Myanmar, and the Palestinians’ legitimate aspirations for statehood and reduction of inequalities within and amongst nations,” said Buhari.

In the context of challenges that have come so sharply into focus in recent years and months, Buhari emphasised the call by Nigeria and many other Member-States for the reform of the Security Council and other UN Agencies, saying ‘‘Change is Long Overdue.”

“We need more effective and representative structures to meet today’s demands that have since outgrown a system designed for the very different world that prevailed at its foundation in 1945,” continued Buhari.

He also called for outright debt cancellation for developing countries facing the most severe fiscal and liquidity challenges.

According to him, the multifaceted challenges facing most developing countries have placed a debilitating chokehold on their fiscal space.

He said this had justified the need to address the burden of unsustainable external debt by a global commitment to the expansion and extension of the Debt Service Suspension Initiative as well as outright cancellation.

X
ASUU president, Osodeke reveals decision many lecturers will take after strike…In the NewsThe president of the Academic Staff Union of Universities (ASUU), Professor Emmanuel Osodeke has warned about the far-reaching effects of the judgemen…