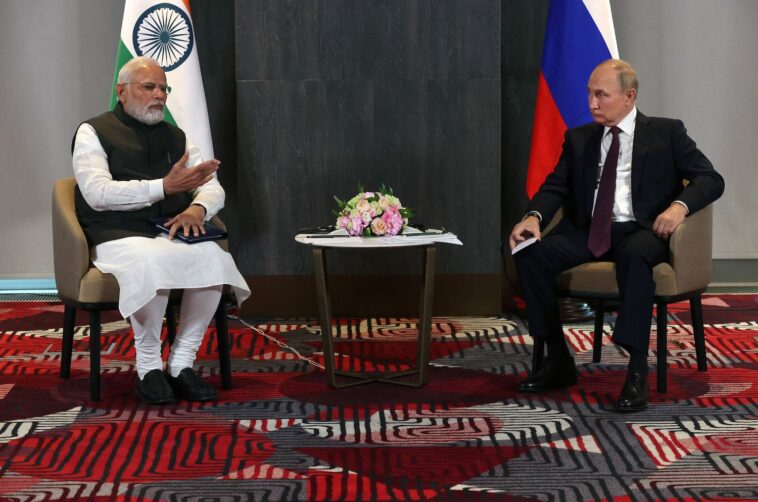 At last week’s Shanghai Cooperation Organisation (SCO) summit in Samarkand, Uzbekistan, Indian Prime Minister Narendra Modi’s remarks toward Russian President Vladimir Putin—upbraiding Russia’s war in Ukraine—surprised observers both in New Delhi and around the world. During their bilateral meeting last Friday, Modi said that “today’s era is not of war” and that Putin should “move onto a path of peace.” Within hours, New Delhi also voted in favor of a resolution to allow Ukrainian President Volodymyr Zelensky to virtually address the United Nations General Assembly in New York.

Both gestures marked a striking departure from the studiously neutral stance that India had previously adopted toward Russia’s war in Ukraine. New Delhi has abstained on every U.N. resolution condemning Russia’s actions against Ukraine. So, what explains this seemingly abrupt shift in India’s position, and will the change make any material difference to the outcome of the conflict?

The first question has at least three plausible answers, while the second depends on several unresolved factors.

Modi’s meeting with Putin may show that after avoiding confronting Russia about the invasion, India has finally decided to distance itself for compelling reasons. On one level, New Delhi has become increasingly uncomfortable with Moscow’s willingness to cozy up to Beijing, its principal and long-term security threat. On another, India wants to avoid alienating the United States and its other partners in the Quadrilateral Security Dialogue, or the Quad—all of which have adopted an unyielding position on Russia’s war in Ukraine. Maintaining good relations with the Quad members and especially the United States is important for a strategy that keeps India’s options open, especially if an increasingly isolated Russia courts China.

Back to Top
Close
X
God Abeg!OpinionIf we do not beg for a solution to corruption, God abeg may only be a psychological comfort without striving to make changes.…

Why did Modi push back on Putin?