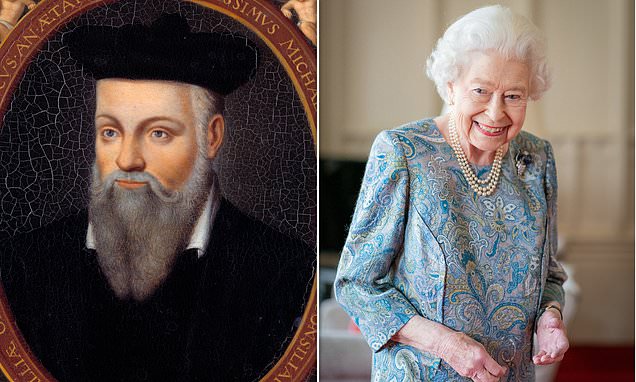 Did Nostradamus predict the Queen’s death… 450 years ago? Intrigue fuels surge in sales for French astrologer’s book after prophet ‘forecast Her Majesty would die in 2022 aged 96’

Book sales about the astrologer Nostradamus have soared since the Queen died, as people have suggested the French prophet predicted her death more than 450 years ago.

Nostradamus has previously been hailed for predicting the Great Fire of London, Hitler’s rise to power and the wars that hit Europe.

Since the Queen’s death on September 8, book sales of Mario Reading’s Nostradamus: The Complete Prophecies for the Future have risen dramatically.

In the week prior to Her Majesty’s death, the book sold just five copies but by the week ending September 17 almost 8,000 copies had been sold pushing it to the top of the paperback charts, The Sunday Times reported.

Within the book, that was first published in 2006, Reading interprets one quatrain as ‘Queen Elizabeth II will die, circa 22, at the age of around 96’.

The increased popularity is thought to have grown since the extracts went viral on social media.

It said: ‘Blue-head shall white-head harm in such degree, As France’s good to both shall e’er amount.’

Nostradamus expert Bobby Shailer, however, suggested that it could be referring to a third world war that could take place within the ‘next few years’.

Most of the predictions are contained in his renowned book Les Prophéties, which contains 942 forecasts in the form of quatrains.

Coined the ‘Prophet of Doom’, the French astrologer took inspiration from biblical texts and his own experiences with the plague.

Described as the ‘Prophet of Doom’, the French astrologer and doctor was inspired by biblical texts and his own experiences of plague, with his predictions focused on famine and sorrow.

More than 400 years after Nostradamus published his book, his work remains popular because his predictions are entirely open to interpretation.

Did Nostradamus predict the Queen's death... 450 years ago?...Book sales about Nostradamus have soared since the Queen died

X
Nostradamus’ 2022 predictionsLast PostVia Daily Mail: Global warming Nostradamus predicted in 1555 that climate change would become so bad that the soaring temperatures would 'half cook' f…