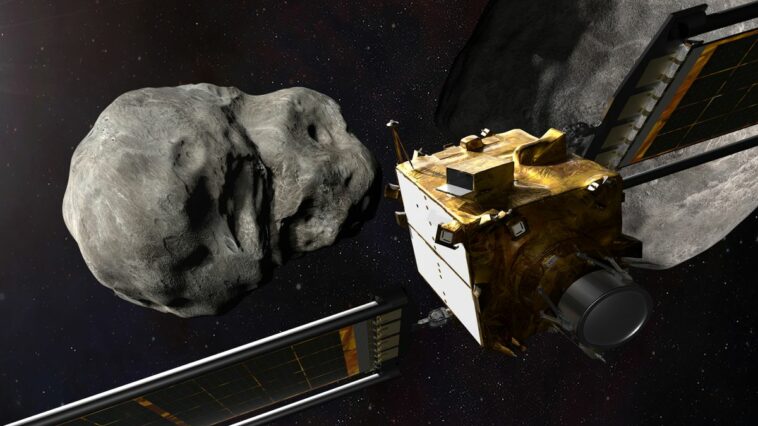 The test will provide vital information on how to stop catastrophic asteroid impacts.

NASA’s Double Asteroid Redirection Test (DART) spacecraft is set to slam into an asteroid on Monday (Sept. 26), in the first ever test of humanity’s ability to deflect life-threatening space rocks before they collide with Earth.

The goal of the probe’s test is to slow the orbit of the 525-feet-wide (160 m) Dimorphos around its larger partner — the 1,280-feet-wide (390 m) asteroid Didymos. Neither asteroid poses a threat to Earth, as they will be more than 7 million miles (11 million kilometers) from our planet at the time of DART’s impact, but NASA scientists want to use the test to study how a more dangerous asteroid might one day be nudged from its deadly collision course. DART will collide with Dimorphos at 7:14 p.m. ET on Monday, with live coverage set to begin at 6 p.m. ET on NASA TV.

“Our DART spacecraft is going to impact an asteroid in humanity’s first attempt to change the motion of a natural celestial body,” Tom Statler, a scientist working at NASA’s planetary defense team, said at a Sept. 12 news briefing about the mission. “It will be a truly historic moment for the entire world.”

DART began its journey to Didymos and Dimorphos 10 months ago, launched aboard a SpaceX Falcon 9 rocket that blasted off from Vandenberg Space Force Base in California, but its roots can be traced back further. In the early 2000s, scientists at the European Space Agency (ESA) proposed another asteroid-bumping test named after Don Quixote, Miguel de Cervantes’ 16th-century literary knight renowned for charging pointlessly at windmills, which he mistook for giants. The quixotic mission was never finalized. Then, in 2011, the ESA agreed to work with NASA on a joint deflection mission: the Asteroid Impact Mission (AIM). AIM was later split into NASA’s DART and the ESA’s Hera missions; the first to collide with Dimorphos on Monday, and the second to launch in 2026 to study the crash’s aftermath.

Scientists expect the test to slow Dimorphos’ orbit down by around 1% and bring it into closer orbit with Didymos. The mission will be considered a success if it slows Dimorphos’ 12 hour orbit down by 73 seconds, but the real change could be by as much as 10 minutes.

As the DART craft will be destroyed on impact, its onboard Didymos Reconnaissance and Asteroid Camera for Optical Navigation (DRACO) will only be able to snap second-by-second images of the orbiter’s last moments before it smashes into Dimorphos. To get a better immediate picture of the outcome, the scientists will turn to the Italian Space Agency’s LICIACube — a smaller “cubesat” spacecraft that split from DART on Sept. 11. Orbiting the aftermath of the collision at a distance of 34 miles (55 km), the LICIACube will beam photos back to Earth of the trajectory-altering impact and the plume of material thrown out by the crash.

“There will be an impact that will change the trajectory; there will be a crater formed; and after that there will be ejecta that will propagate through space, and LICIACube will photograph this,” Stavro Ivanovski, a researcher at Italy’s Institute for Space Astrophysics and Planetology and a member of the LICIACube team, said during a Sept. 19 news briefing.

Back to Top
Close
X
German scientists managed to count all the ants on Earth…ScienceVia Urgent News: Thanks to scientists from Germany, there is one less mystery in the world: they have calculated the number of ants that inhabit our p…

NASA will smash its DART spacecraft into an asteroid on Monday... first attempt ever made to change the motion of a natural celestial body

X
Direct hit as NASA smashes spacecraft into asteroid…FeaturedVia BBC News: The American space agency's Dart probe has smashed into an asteroid, destroying itself in the process. The collision was intentional and…