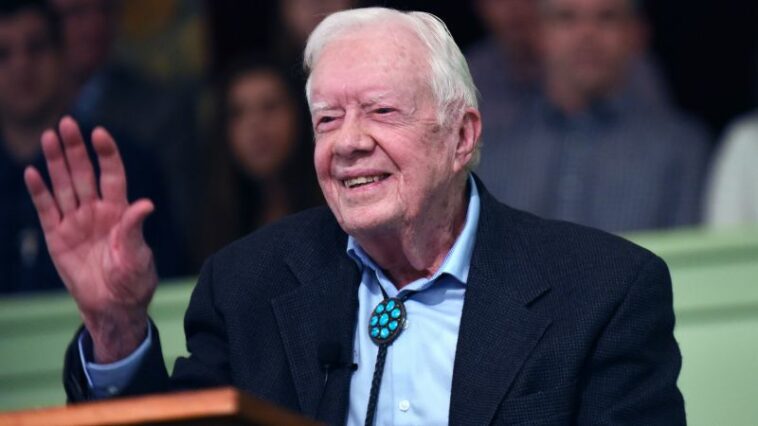 Carter will celebrate quietly at home with his family, according to a spokesperson from The Carter Center. The Carter Center will host a series of virtual events to celebrate the former president’s birthday and legacy, and the public is encouraged to send him a virtual birthday message via his nonprofit.

Carter became the oldest living US president in history after the passing of George H. W. Bush, who died in late 2018 at 94. In recent years, he has kept a low public profile due to the coronavirus pandemic but has continued to speak out about risks to democracy around the world, a longtime cause of his.

He was a peanut farmer and US Navy lieutenant before going into politics, eventually serving one term as governor of Georgia and president of the United States from 1977 to 1981.

The former Democratic president is widely revered for his championing of human rights. His brokering of the Camp David Accords with Egyptian President Anwar Sadat and Israeli Prime Minister Menachem Begin in 1978 remains central to his legacy.

After his presidency, Carter has leaned further into human rights, and founded The Carter Center along with his wife, Rosalynn, in hopes of advancing world peace and health. The Carter Center has worked to advance democracy by monitoring foreign elections and reducing diseases in developing countries over the years. Carter himself has been a longtime volunteer with Habitat for Humanity.