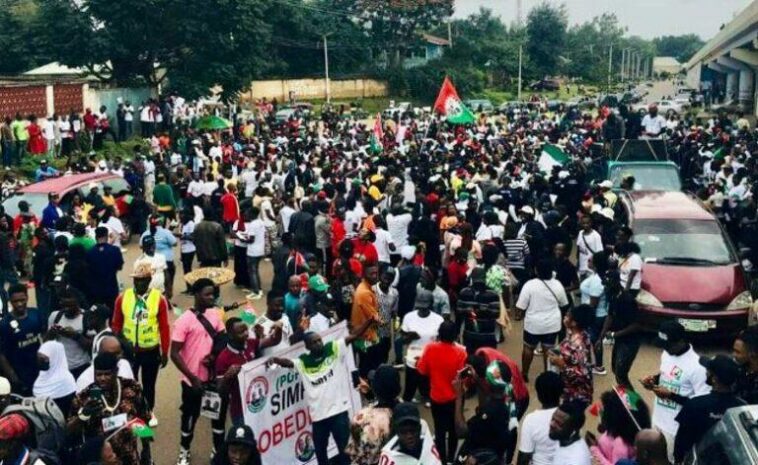 Thousands of supporters of Labour Party presidential candidate, Mr. Peter Obi, under the aegis of the fast-growing ‘Obidient Movement’ converged on strategic parts in Lagos.

From National Stadium, Surulere to Lekki, and from Ikeja to Festac area of Lagos, many of the supporters on Saturday morning were seen holding the posters of the LP candidate and his vice, Yusuf Baba-Ahmed, who had branded vests as they marched around and moved to the bridge leading.

The rally caused both human and vehicular traffic around the Stadium axis, from Alaka and Teslim Balogun Stadium and down to Ojuelegba.

Recall Vanguard reported yesterday that a Third Force Movement appealed to the Federal Ministry of Youth and Sports Development to approve the car park of the National Stadium Lagos, for the October 1 rally of supporters of Labour Party, LP, Presidential Candidate, Mr. Peter Obi.

Noting that the use of the stadium would avert unintended lockdown, The Third Force Movement, in a statement by Mr. Olawale Okunniyi, said without the approval the Organisers cannot stop Nigerians from using other venues like Gani Fawehinmi Park or Lekki Toll Gate.

At Lekki Toll Gate, the Lagos State Police Command was able to enforce strict compliance with the no rally order.

A federal high court in Lagos had on Wednesday ordered the LP and its supporters not to converge on the Lekki tollgate for the rally.

Chlorpheniramine #OBIdients 🇳🇬 on Twitter: “We never even start but the crowd choke for Ikeja. Obidients on standby for Peter Obi. Pass it on! #Lagos4ObiDatti pic.twitter.com/RjSUAWlU39 / Twitter”

We never even start but the crowd choke for Ikeja. Obidients on standby for Peter Obi. Pass it on! #Lagos4ObiDatti pic.twitter.com/RjSUAWlU39

Back to Top
Close
X
Independence: Buhari lists achievements, begs ASUU to resume…FeaturedPunchIn what would be his last Independence Day speech to Nigerians, the President, Major General Muhammadu Buhari (retd.), has congratulated Nigerian…

[Videos] Thousands of supporters march for Peter Obi in Lagos