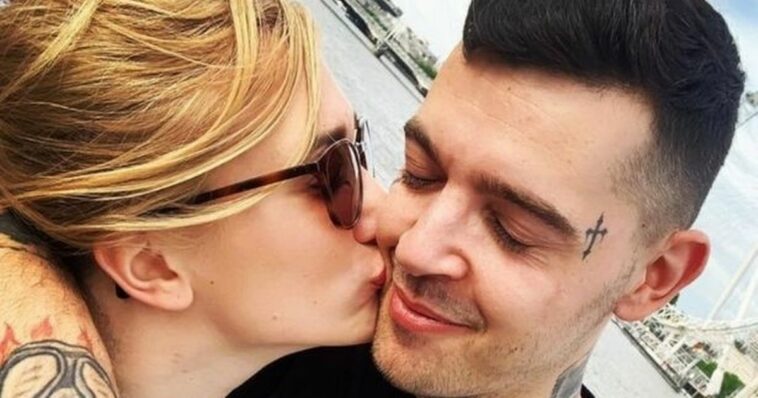 Tony Garnett who left his wife and kids for Ukrainian refugee Sofiia, has ended their relationship after she rammed a knife into the kitchen wall during a drunken row, he claims

A distraught refugee is set on returning to war-torn Ukraine after being dumped by a British man who left his wife and kids for her.

British father-of-two Tony Garnett, from Bradford, told Sofiia Karkadym, 22, there was no chance they would ever be a couple again and he was keen to ‘move on’.

The pair started a four-month affair just 10 days after Sofiia moved in, but police arrested her after a drunken row during which she rammed a kitchen knife into a wall and Tony declared he was ending the relationship.

The 22-year-old went on to risk being arrested for a third time after she turned up again at her the home of her former lover, ignoring police instructions.

Tony decided to make contact with her once more after that, as he called her after hearing that she had been sobbing.

He told the Daily Mail: “I’m not heartless. I do feel sorry for her. But relationships do come to an end and this one is over. I hope we can be friends when all this hysteria has died down.

“I talked to her last night and told her that there was absolutely no chance of us getting back together.

“Sometimes you have to be cruel to be kind. She’ll be much better off in Ukraine or if she gets a new relationship, good luck to her.”

After briefly meeting with her Tony told MailOnline: “I allowed her in about 30 minutes. The police warned her before to stay away from me and my home. She needs to listen to them.

“I told Sofia again that we are finished. She said she was returning to her family in Ukraine and was actually more calmer which surprised me.

Ukrainian refugee returning to war-torn home after being dumped

X
Cop who exposed Jimmy Saville claims there's another 'untouchable' p…Last PostMark Williams-Thomas, known for documentary The Other Side of Jimmy Savile, which exposed Savile's prolific child abuse, says there is another "untouc…