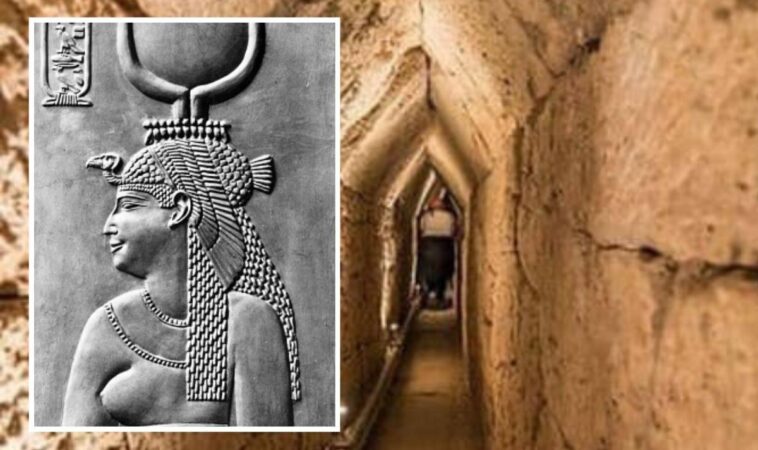 Cleopatra VII Philopator was Queen of the Ptolemaic Kingdom of Egypt from 51 to 30 BC, and is especially known for her relationships with Julius Caesar and Mark Antony.

Experts have made a stunning breakthrough in the age-old quest to discover Cleopatra’s long-lost tomb after archaeologists working at a site in Egypt said they found a tunnel that could lead to the burial place of the iconic Egyptian Queen. The researchers have hailed the discovery of the lengthy underground passage at a site in the ancient city of Taposiris Magna, west of Alexandria, as a ‘geometric miracle’ as it stretches for more than 4,800 feet. Dr Kathleen Martinez, an archaeologist from the University of San Domingo, says there is a chance that lying at the end of this tunnel could be the final resting place of ancient Egypt’s most famous Queen, possibly alongside her lover Mark Anthony.

While Ms Martinez has since admitted that there is only one percent chance of finding their remains, she said that should they stumble across the long-lost tomb, it would mark the “most important discovery of the 21st century”.

“If there’s a one percent chance that the last queen of Egypt could be buried there, it is my duty to search for her.

The Egyptian authorities said if Dr Martinez’s team do successfully locate the tomb, it will be “the most important discovery of the 21st century”.

Experts also discovered a wealth of artifacts inside the temple complex they were excavating, which included coins bearing the images and names of both Queen Cleopatra and Alexander the Great, as well as the tunnel itself.

According to researchers, the tunnel dates to the Ptolemaic period of about 304 BC to 30 BC. This coincides with Cleopatra’s ruled over Egypt, whose reign lasted from 51 to 30 BC.

Cleopatra became Cleopatra VII, queen of Egypt, after her father, Ptolemy XII, died. Her brother was made King Ptolemy XIII at the same time – with the siblings ruling Egypt under the formal title of husband and wife.

The hunt for Cleopatra’s tomb has gone on for years, but the famous Queen has never been found in the 2,000 years since she died.

Back to Top
Close
X
Crisis on the Nile: Global warming and overuse threaten Africa’s longest river…Special ReportFrance 24Running from Uganda to Egypt, the Nile is essential to the survival of millions of people living in Africa. But a combination of climate chan…

Cleopatra's long lost tomb may have finally been discovered

X
Banyankole: The African tribe where the groom must have sex with the bride’s aun…Special ReportThis Banyankole tribe from Southwestern Uganda. In this tribe when it comes to marriage, the aunts to brides have special role to play by sleeping wit…