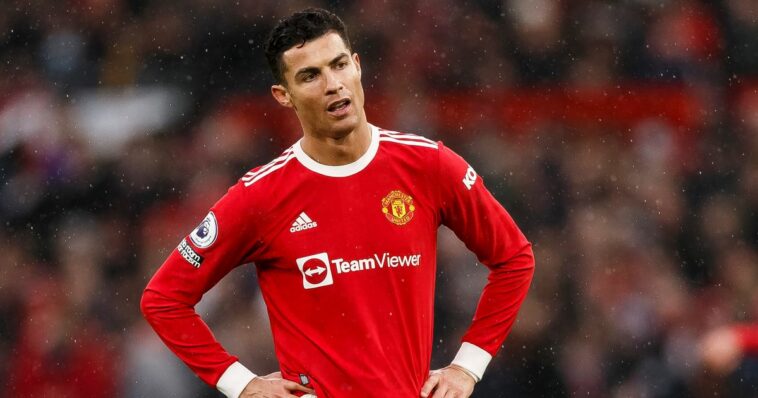 The suspension means that Ronaldo, who is now a free agent, is banned for two games should he join a Premier League club, with Chelsea the favourites to sign the Portugal international, while Arsenal have also been linked. If he is to join the Blues then he would miss clashes against Bournemouth and Nottingham Forest before becoming available to face Manchester City. At Arsenal, he would not be available for games against West Ham and Brighton.

The veteran striker was charged with ‘improper and/or violent’ conduct by the FA following the incident in Merseyside last April. An FA statement said: “Cristiano Ronaldo has been suspended for two matches, fined £50,000 and warned as to his future conduct for a breach of FA Rule E3.

“The forward admitted that his conduct after the final whistle of the Premier League game between Manchester United FC and Everton FC on Saturday 9 April 2022 was improper. An independent Regulatory Commission found that his conduct was both improper and violent during a subsequent hearing, and imposed these sanctions.”

Ronaldo was cautioned by Merseyside Police over the incident. After the altercation, the Portuguese star issued an apology on social social media.

In a message posted on his Instagram account, Ronaldo said: “It’s never easy to deal with emotions in difficult moments such as the one we are facing. Nevertheless, we always have to be respectful, patient and set the example for all the youngsters who love the beautiful game.

Back to Top
Close
X
Ronaldo receives eye-watering new offer as details to try and tempt him emerge…English FootballMirrorAfter missing out on a transfer away from Old Trafford in the summer, he is now a free agent and, in theory, will have his pick of clubs. Howeve…

X
Guardiola extends Man City deal until 2025English FootballPunch News Pep Guardiola has announced he agreed to a two-year contract extension that will keep him at the Premier League champions until 2025, …