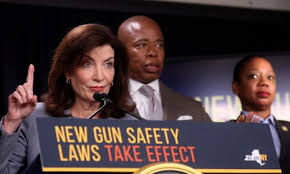 A federal judge has blocked the state of New York from restricting the carrying of guns on private property under a Democratic-backed law adopted in September.

A Tuesday ruling by John Sinatra, a US district judge in Buffalo, struck down a provision in the law that made it a felony for a licensed gun owner to possess a firearm on private property unless the property owner allowed it with a sign or express consent.

Sinatra, who was appointed under Donald Trump, found that the provision violated the second amendment right to “keep and bear arms”.

The ruling was the latest courtroom victory for gun owners challenging the New York law, the Concealed Carry Improvement Act, that as of 1 September made obtaining a firearms license more difficult and barred firearms from a long list of “sensitive” public and private places.

A federal appeals court has put on hold rulings by another judge that blocked major parts of the law including bars on people from carrying concealed guns in certain “sensitive locations”.

Sinatra ruled in a lawsuit brought by two firearms owners and two gun rights groups. The Firearms Policy Coalition, one of the groups, called the ruling a “monumental step” toward restoring the gun rights of New Yorkers…

Back to Top
Close
X
Gunman kills up to 10 people in mass shooting in Virginia Walmart store…United StatesScotsmanPolice say the person who opened fire at a Walmart store in Virginia was an employee of the retail giant.The chief of Chesapeake Police Mark G…