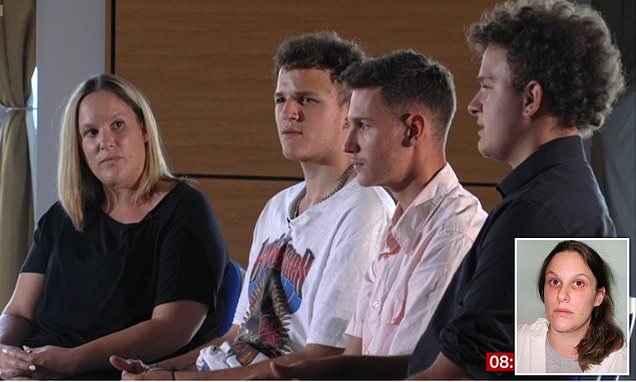 A mother who stabbed to death her paedophile neighbour for abusing her three sons said he showed ‘no remorse or fear’ in the moments before she plunged a knife into him eight times.

Sarah Sands drank two bottles of wine before going to the home of convicted child sex offender Michael Pleasted, 77, in a neighbouring block of flats in east London in 2014.

Mrs Sands, now 39, was seen on CCTV entering the elevator while brandishing a knife, but said she never intended to kill him.

Speaking in an extraordinary new BBC documentary, called Killing My Children’s Abuser, she said things went south when the paedophile accused her children of lying before trying to take the bladed weapon from her left hand.

The eye-opening programme comes after her brave sons, who have all turned 18, waived their right to anonymity to support their single mother, who is out of prison after serving four years for manslaughter.

Mrs Sands is now campaigning for a tightening of the rules on sex offenders being allowed to change their names, after it emerged that Pleasted had acquired a new identity to hide his 24 previous child abuse convictions.

In the documentary, Mrs Sands recalled the day she went to see Pleasted. She said: ‘I didn’t know what I was doing. I was frightened and I had made a terrible mistake. He showed no fear – and was not remorseful at all.

Back to Top
Close
X
Atiku only candidate with Nigerian-based businesses – Reno Omokri…In Other NewsDay 44 of #WhyShouldIVoteAtiku: Every business concern that Waziri Atiku Abubakar is engaged in, whether education, port logistics, agriculture, healt…

Mother recalls stabbing paedophile to death after he abused her sons

X
Former teacher breaks bail to marry student he's charged with having sex wit…In Other NewsA former high school teacher who was forced to resign for having an affair with a student is now "lawfully married" to the pupil.Thomas Blake Tucker, …