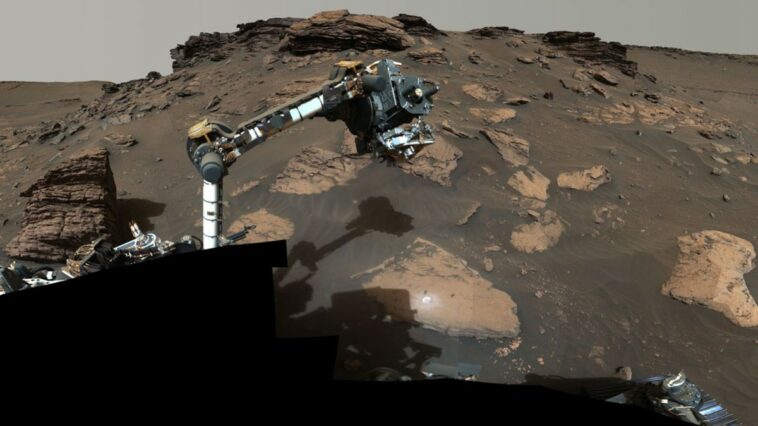 NASA’s Perseverance rover has been searching for signs of life on Mars since it landed in an ancient lakebed on the red planet in February 2021. In a trio of new studies, scientists have revealed tantalizing details about the habitable conditions that once existed on Mars, while constraining the odds of discovering Martian life in the future.

Mars is currently a frigid and desiccated world that is hostile to life, but there is abundant evidence that it was warmer, wetter, and more welcoming many billion of years ago. Simple forms of life may have emerged in the lakes and rivers that once flowed in this ancient era, which is why NASA sent Perseverance to search for fossilized traces of any bygone Martian microbes. The rover is also collecting samples from Jezero Crater that the mission team hopes to pick up with a future spacecraft so that they can be delivered back to Earth for more rigorous examination. The data for the new studies was collected over nearly two years of extraterrestrial exploration.

The teams behind each of Perseverence’s specialized instruments published summaries of their findings in a batch of three studies on Wednesday. The new research follows an August study released in the journal Science that reported a surprising abundance of igneous (or volcanic) rocks in the areas first explored by Perseverance, and offers more granular details about the rover’s new discoveries.

“What’s coming out now is the actual instrument documentation of all this evidence that we saw,” said Eva Scheller, a planetary scientist at the Massachusetts Institute of Technology who led the study about SHERLOC, an onboard ultraviolet spectrometer, which was published in Science, in a call with Motherboard. “The way that the rover operates is with different instruments that have different insight.”

“This is actually the first time we have used this kind of instrumentation in a planetary mission,” she added, referring to SHERLOC. “So in itself, it is also a demonstration of a new engineering technique.”

As Scheller and her colleagues describe in their study, SHERLOC detected two distinct periods when the crater was influenced by the presence of water. While it’s challenging to pin down an exact timeline, the team estimated that the area hosted water around 3.8 billion years ago. More than a billion years later, the crater contained a saltier brine that produced “weird” chemicals called perchlorates, Scheller said.

“In that kind of environment, we’re seeing very, very strange chemistry which is not common on Earth at all, but seems to be more common on Mars because we’ve seen these kinds of materials in almost all the missions now,” she explained. “So there are two liquids from different rocks with two different ages with very different chemistry that [SHERLOC] was able to determine.”

The instrument was also able to detect organic molecules, which are key ingredients for life, confirming that habitable conditions did once exist in Jezero Crater.

“There’s still ongoing investigation that we’re doing,” Scheller said. “But we want to look for organic compounds because we see them as the building blocks for life. They are not necessarily signs of life, but you want to see liquid water and organic compounds together in an environment because they’re the key components of what could make an environment habitable.”

Back to Top
Close
X
Why did Einstein find quantum mechanics debatable?…ScienceBy Paula Ferreira Quantum mechanics is complex in more than one way. It’s not just complicated in terms of math, but also hard to interpret in terms o…

X
NASA scientist: humans will live and work on the moon by 2030…ScienceStraight Arrow NewsFor the first time in 50 years, a NASA spacecraft visited the moon Monday. One of the heads of the program said it’s the next step …