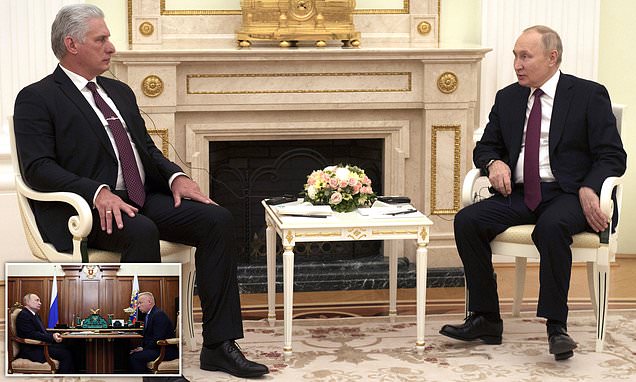 Vladimir Putin has again been pictured tightly gripping a chair and shuffling his feet amid on-going speculation about the Russian president’s health.

Footage from Putin’s Tuesday meeting with Miguel Díaz-Canel, the president of Cuba and leader of the country’s communist party, showed the Russian despot sitting awkwardly in his chair as the pair spoke in front of the cameras.

Despite his public appearances being carefully stage-managed by the Kremlin’s propagandists, signs that Putin, 70, is suffering from health problems have been visible on numerous occasions this year – fuelling speculation and rumours.

In the latest example, a puffy-faced Putin is seen smiling gingerly as he speaks with Díaz-Canel infront of a marble fireplace in Moscow.

His left hand is seen wrapped tightly around the arm of the white chair he is sitting on, as if to try and stabilise himself. Putin’s right hand appears to be fiddling with something, and he taps his feet and shuffles them across the flowery carpet.

On Wednesday, Putin was pictured in another meeting – this time with Dmitry Mazepin, Chairman of the Board of Directors of Uralchem Group, a Russian manufacturer. The pair sat opposite each other across a large wooden desk, which Putin has often used to conduct meetings.

As with his meeting with the Cuban president, the Russian president was in photographs tightly holding on to the edge of his desk, this time with his right hand.

Even before Vladimir Putin ordered his military forces to invade Ukraine on February 24, rumours have been swirling about the state of his health.

But with the added scrutiny faced by Putin since the start of the war, more signs that Putin is struggling with health issues have been spotted.

In July, the Russian president was pictured awkwardly swatting mosquitos from his face. That same month, he was seen hobbling from his presidential plane during the welcoming ceremony in Tehran.

Similarly, at a huge Victory Day parade in Moscow in May, the 70-year-old appeared to walk with a limp and had a blanket over his lap, while in April he was seen gripping a grand desk during a televised meeting with his defence minister.

Since then, several more of Putin’s televised meetings with other Kremlin officials – all from the same desk – have often shown him gripping the tabletop.

Putin grips chair arm and shuffles his feet around during meeting