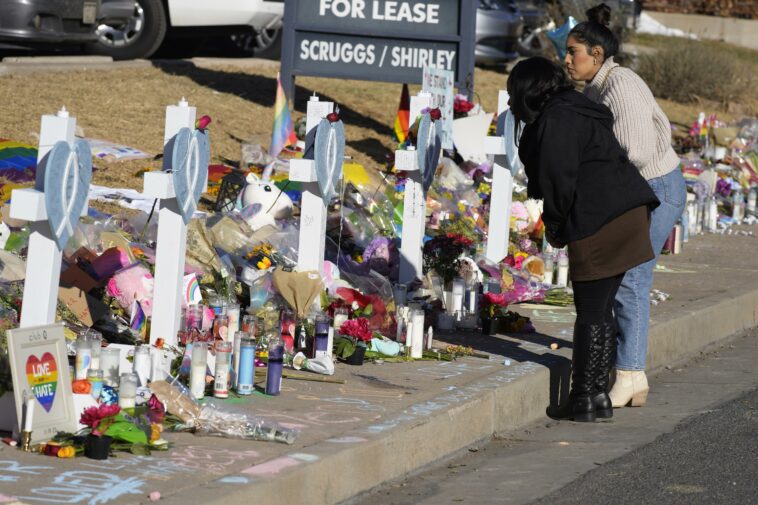 COLORADO SPRINGS, Colo. — Deanne VanScyoc said she dropped to the floor behind a pool table at Club Q and called 911 as the first shots rang out just before midnight, hitting people at the bar who had been drinking and chatting.

VanScyoc was facing the entrance from behind a glass wall when the shooter came in, she said. The shooter turned right and fired a single shot toward the bar, then three more in rapid succession, then a flurry of shots. As pop music pounded and a strobe light flashed, VanScyoc saw the shooter, in body armor, move in a crouch down a ramp, rifle at eye level, and head toward the dance floor.

“There was no hesitation,” VanScyoc told The Associated Press in an interview.

Patrons at the gay club that night were celebrating a drag queen’s birthday and the atmosphere had been festive. When the shooting started, much of the crowd already had left the dance floor and was gathered in an enclosed patio just off the dance floor.

Five people were killed and 17 wounded by gunfire in an attack that unfolded over just minutes, according to authorities.

As the shooter moved deeper into the club, VanScyoc heard another volley of shots. Shooter Anderson Aldrich, 22, sprayed bullets across the dance hall. Partygoers along the walls flipped over tables and ducked behind them, according to VanScyoc and a friend who was there, A.J. Bridgewater. The two recounted what happened during the shooting while standing beside the growing memorial of flowers outside the club on Tuesday night.

Back to Top
Close
X
Where is Ghislaine Maxwell now? She’s in a Florida prison…In Other NewsDNYUZSince Jeffrey Epstein’s death in 2019, his longtime girlfriend, Ghislaine Maxwell, has continued to be the subject of public and legal scrutiny. …

X
Body of missing hiker found days after disappearance in New Hampshire mountains…In Other NewsThe body of Emily Sotelo, a 19-year-old woman who went missing while on a hike in New Hampshire, has been found. Sotelo was last seen on Sunday mornin…